Nova? No Problem! is an optional mission in Borderlands: The Pre-Sequel.

Janey needs a safe opened, which can only be done by using shock damage to disable five security systems at once. Her solution involves using a Nova shield to hit them all with a shock nova simultaneously, and she has Rapid Release stashed nearby for just such a purpose.

The area is inhabited by hostile scavs, and these predominantly unshielded enemies fall quickly to incendiary attacks and head shots. More scavs enter the room itself, emerging from doors inside and bringing the fight into close range.

There are five security devices in the room that must be disabled simultaneously, so this requires donning the Rapid Release shield, standing in the electrical fence to deplete the shield, and then running a few steps into the middle of the room to stop between the devices for when the nova releases. The distance to each device must be roughly equal for the nova to hit them all at once. This can be difficult, especially with a small nova radius, and may take a few attempts to complete. The shock damage to the character after each attempt is not significant, but numerous attempts will eventually require a Vault Hunter to have some method of self-healing.

Once the security devices have been disabled, it is a simple matter to recover the items in the safe and return to Springs.

"Pat yourself on the back for your creative problem solving prowess!" 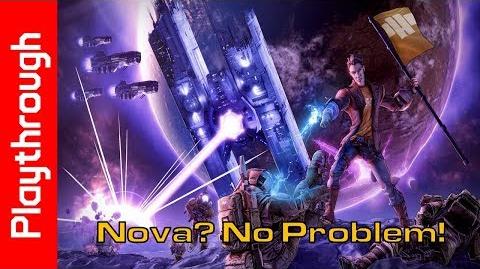 Nova? No Problem!
Retrieved from "https://borderlands.fandom.com/wiki/Nova%3F_No_Problem!?oldid=476265"
Community content is available under CC-BY-SA unless otherwise noted.