Nothing Is Never an Option

Nothing is Never an Option is an optional mission in Borderlands: The Pre-Sequel.

"A mysterious distress signal from the moon's surface needs investigating..."

Upon arriving at the signal talk to Amelia, the stranded adventurer who activated the beacon. She will tell you that she is on the run, at which point three waves of scavs will attack. Most of these will jump down from the cliff to the right. There will be one or two Stolen Dahl Jet Fighters in these waves further reinforcing the ground assault. Although you are ostensibly protecting Amelia, she does not take damage during the attack, so you can fall back if needed. Note that the terrain is awkward: it is possible to get stuck in several spots, requiring you to back up slightly and jump over the obstacle. The last wave will consist of more scavs and Boomer, Amelia's ex-boyfriend, who fights in a slightly tougher than average Stolen Dahl Fighter. Corrosive weapons are a useful addition to combat the jet fighters.

"You want to kill, or not be killed? Take your pick" 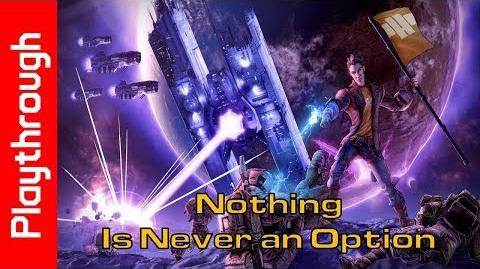 Nothing Is Never an Option
Retrieved from "https://borderlands.fandom.com/wiki/Nothing_Is_Never_an_Option?oldid=416656"
Community content is available under CC-BY-SA unless otherwise noted.