Note for Self-Person is an optional mission in Borderlands 2 given by ECHO Recorder dropped by a goliath inside of The Fridge. It becomes available after both Bright Lights, Flying City and The Cold Shoulder are complete.

"A Goliath named Crank has a cache of weapons hidden somewhere in The Fridge. Go find it."

To get the mission, one must complete Bright Lights, Flying City first and then The Cold Shoulder before the Goliath appears near the exit toward The Highlands by the crystalisks. The Goliath may appear prior to leaving the zone to turn it in. Killing him without enraging and he'll drop the ECHO recorder needed to start this mission. It states that the location of a cache of weapons hidden somewhere in The Fridge. However, sometimes a One-Armed Bandit will spawn instead of the Goliath and killing him will not cause the ECHO recorder to drop.

The cache is inside the Crystal Claw Pit which is reached through the Rat Maze. Numerous rats fill the area presenting a hazard on the approach to the chest. To open it, one has to clear away the blocks of ice on top of it, turn in the mission, and only then would the chest becomes accessible. At this point, the mission ends, but Smash Head spawns and attempts to defeat the Vault Hunters. Smash Head carries multiple Midget Boners, a rocket launcher, and a large Dahl sign as a makeshift shield.

A good strategy against Smash Head is to open the chest and immediately back off to the center of the arena using the shipping container as cover. The container is tall enough to block all of Smash Head's rockets but allows the vault hunter to score easy headshots. Rocket Launchers are highly effective against him as the splash damage can ignore the shield and take out his midget boners as well.

It is possible for Smash-Head to spawn with an E-Tech launcher, including during the first playthrough, but he will not spawn with a Norfleet.

"You found Crank's weapon cache, or to describe it as Crank might, "you find gun bang weapon box for having to get the reward.""

Turn In: The Fridge 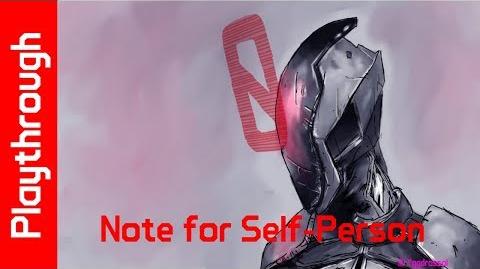 Note for Self Person
Retrieved from "https://borderlands.fandom.com/wiki/Note_for_Self-Person?oldid=486111"
Community content is available under CC-BY-SA unless otherwise noted.