Nomads are a type of enemy in Borderlands 2. They are slow-moving bandits with high health. Some nomads wield large, bulletproof shields that provide nearly full cover. Most nomads will only carry a gun whereas others will dual wield a pair of guns.

Nearby when Goliath is attacked

Nearby when Goliath goes into rage mode

When grenade is thrown

When Axton throws down a turret 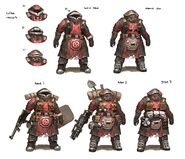 A Nomad Torturer, walking with his shield.
Add a photo to this gallery

Retrieved from "https://borderlands.fandom.com/wiki/Nomad?oldid=394309"
Community content is available under CC-BY-SA unless otherwise noted.