No Such Thing as a Free Launch

No Such Thing as a Free Launch is an optional mission in Borderlands: The Pre-Sequel given by Cosmo Wishbone. It becomes available after Intelligences of the Artificial Persuasion is complete.

This mission is available from Cosmo Wishbone at the very top of the Grabba, the darksiders base in central Triton Flats. He will require 3 items to complete Excelsior, the rocket he will use to send a satellite to orbit that will play music of his own composition.

The first item, a flow regulator, is located on a large hydraulic pump at the far western side of the Pumping Station in southwest Outlands Spur. Once the flow regulator is removed, the pump will surpass it's limits, fail and fall off the side of the platform.

The second item is the flight data recorded from the Drakensburn, which is part of a collection of space ship parts owned by Tony Slows. Tony's museum is located at the very beginning of Outlands Spur, just opposite the Fast Travel station. A fee of $10 must be placed in a money box to take a tour of the exhibits. The flight data recorder is inside the curtained-off building that Tony will make his way towards after describing a couple of other relics. The recorder must be stolen, which infuriates Tony, but he will not attack.

The final item is a gyroscope located inside Banjo Point, back in southeast Triton Flats. In the building to the left of the entrance, a console must be activated to open the enclosure revealing the gyroscope, which can then be taken. Once all these items are in hand they must be taken back to Cosmo.

When the parts are given to Cosmo to complete his rocket, he will ask that the nearby shugguraths be killed to clear the launching area. When this task is done, the rocket will launch and the satellite will begin playing his original composition. After a few measures of Cosmo's music, DJs Boom and Rang will pirate his transmission, causing him to attempt to increase the signal strength and electrocute himself. The mission may then be turned in to the ash pile that was Cosmo.

"Pick over Cosmo's charred corpse for your reward."

Main article: No Such Thing as a Free Launch/Transcript 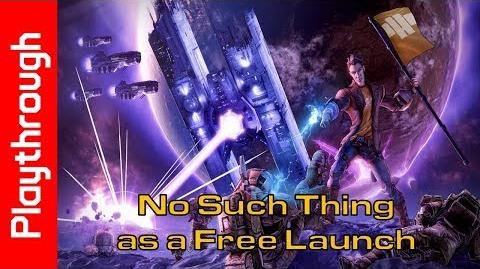 No Such Thing as a Free Launch
Retrieved from "https://borderlands.fandom.com/wiki/No_Such_Thing_as_a_Free_Launch?oldid=416719"
Community content is available under CC-BY-SA unless otherwise noted.