Nisha Kadam, also known as the Sheriff of Lynchwood, is an optional boss in Borderlands 2, encountered during the mission Showdown. She is also featured as a playable character in Borderlands: The Pre-Sequel.

Nisha had a rough childhood, having to deal with an abusive mother who often yelled and tossed all sorts of things at her. She used this as a way to train her reflexes, eventually being able to catch everything her mother could throw at her. One day, Nisha's father got her a puppy, which she started to care for. The two of them were inseparable, until the dog was bitten by a frenzycrutch. At first, the dog showed no strange signs, but during one night, while Nisha was catching more of her mother's projectiles, one of them slipped off her hand and hit the dog. Its eyes went red, lips went blue, and it jumped on Nisha and bit her in the neck, while her mother laughed. After getting patched up by her father, Nisha used a shovel to bash the dog's brains out.

As Nisha grew, she began to develop an interest in killing bandits. Her tendency to kill political leaders who were also bandit leaders earned her a reputation as the "bandit who kills bandits." Her actions eventually caught the attention of a man named Jack, who then recruited her to be part of his personal team of Vault Hunters. She then joined three other Vault Hunters: Athena, Wilhelm, and Claptrap, on a spaceship headed for Helios, Hyperion's moon base.

After finishing her job, Nisha began a romantic relationship with Handsome Jack, and became his significant other. Later on, Nisha assisted in the fall of New Haven and even managed to capture and imprison Brick, as well as killing his beloved puppy. At some point, Handsome Jack gave Nisha governing power over the town of Lynchwood, with her taking up the office of Sheriff. She rules Lynchwood with an iron fist, enforcing over 200 of her own laws, each of which is punished by death. After the Vault Hunters arrive and start disrupting her control under the orders of a vengeful Brick, she challenges them to a showdown at high noon, in classic western style, and was defeated.

Showdown is Nisha's action skill. This skill enables Nisha to automatically aim at enemies in front of her for a short time. Nisha gains increased Gun Damage, Fire Rate, Reload Speed, Accuracy, and Bullet Speed for the duration. Sniper Rifles and Rocket Launchers do not receive the damage bonus. 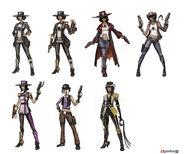 Concept arts of the Sheriff of Lynchwood for Borderlands 2 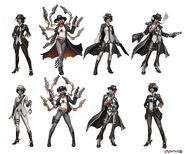 Nisha as the Sheriff of Lynchwood in Borderlands 2

Concept art for Borderlands: The Pre-Sequel

Promo art for Borderlands: The Pre-Sequel

Retrieved from "https://borderlands.fandom.com/wiki/Nisha?oldid=451378"
Community content is available under CC-BY-SA unless otherwise noted.