New-U Stations are antenna-like terminals scattered throughout Pandora and the universe, primarily located at outposts and transition points. The New-U Station serves a vital function. It stores a character's DNA against the possibility of "accidental death or dismemberment" and can digistruct an entirely new body to replace the recently deceased one. This 'new you' will appear at the last station the character activated.

There are two versions of the New-U Station. The interactive models are mainly located at major towns or outposts. The smaller, non-interactive versions are scattered in less populated areas such as caves. Both types of stations do two things: They act as a save point for Borderlands' auto-save function, and as a respawn point in case of character death. When a character comes within range of a station, the red light will change to green and the game will automatically save.

The fully interactive New-U-Stations offer several functions to the character:

In Borderlands 2, the character customization options have been moved to Quick Change stations, such as those in Sanctuary and Liar's Berg.

In Borderlands: The Pre-Sequel, New-U Stations exist only in Helios, as on Elpis New-U Stations are replaced with Medvacs (aka Dahl Field Reconstruction System) manufactured by Dahl. Apart from the different company, the only difference between New-U Stations and Medvacs are appearance and comments on respawn.

In Borderlands 3, New-U Stations are once again manufactured by Hyperion only and functions similarly to Borderlands 2 and Borderlands: The Pre-Sequel except it only shows the reconstruction animation when the New-U is used. 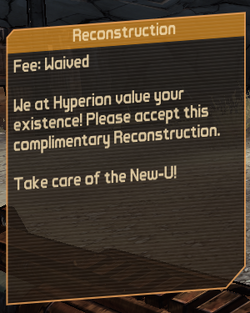