After obtaining the mission, the Vault Hunter must fast travel to Nekrotefayo. The entrance to Scryer's Crypt is in Desolation's Edge. The first part of the area is simply approaching the two halves of Ensign Verbal. Throughout the area, the Vault Hunter will be attacked by a series of invisible Revenants. Ava will assist in combat using an SMG and Maya's Phaselock ability to hold enemies in place. From here, the majority of the area is fighting guardians and regular Nekrotefayo fauna. Each time a glyph is interacted with, a small scene will play out before the Vault Hunter and Ava, and then open up a path to continue.

During the final room before fighting The Seer, Ava will be turned invisible and vanish. The Vault Hunter has to double back until they hear her crying the loudest, dealing with the various Guardians that will attack. Each time the invisible Ava is approached, she will glow white temporarily, before moving to a new location. Once she reaches the glyph again, she will end the illusion, become visible, and help fend off the remaining Guardians before continuing.

The Seer has a significant amount of health, even without Mayhem Modifiers, and will take a considerable amount of firepower to down. It spawns at 1 level higher than the Vault Hunter even if at max level. It has three health bars: two shields with an armored bar between them. Each one triggers a new phase and adds a new attack.

The Seer does not move particularly fast, preferring to slowly walk towards the Vault Hunter and fire finger beams. Besides this attack, it will occasionally point towards the sky and create a beam of light, spawning Guardians. It will also activate the massive floating cubes above parts of the arena, creating shock fields that should be avoided. Additionally The Seer can turn invisible, being only slightly visible by the light blackened outline of its body. It will typically walk to a new location as if it had teleported, and during this time it will be unable to be seen on the minimap by the usual skull indicator for a boss.

During the start of phase 2, it will shroud the arena in a bright fog and teleport back towards its initial starting point. While not much different in attack pattern, it will add a devastating blade attack to its repertoire where it charges its target and slices quickly in two movements. There is, however, a way to effectively cause The Seer to stumble during this attack, and that is to be near one of the random stone fixtures around the arena. If The Seer hits one of these rocks when trying to charge, it will come to a dead stop. It will also be forced back if shot in the head during the charge.

The hardest part of the fight comes during phase 3. During this phase, The Seer will regularly spawn Herald's, who will do their usually effect of spawning souls that can power up other Guardians. Here, however, The Seer will simply absorb all errant souls around the field, healing for a substantial amount per soul. Not only does The Seer have to be attacked, but, if the Vault Hunter cannot outdamage the impressive health regeneration, then the Heralds must be quickly dealt with. The Seer can spawn more, and those must be prioritized, even as other Guardians spawn and The Seer continues firing its finger beams and attacking with its blades. Occasionally, The Seer will lift off the ground and fire additional projectiles while standing perfectly still. The projectiles in this attack have minor homing and can be harder to dodge without strafing.

Because of its low mobility, shock weapons, corrosive weapons, and cryo weapons that fire numerous projectiles such as the Light Show are effective. Additionally, the Guardians that spawn are highly susceptible to shock damage. During phase 3, rocket launchers with multi-hit projectiles such as the Backburner can help override the healing. During the initial fight, Ava can also help provide assistance when downed. Ammo will be a concern if the character is using a build that does not maximize damage output, but the occasional Possessed Guardian will appear. Killing it will release a red orb that, when destroyed, will drop an ammo pack that fills all ammo buckets up immediately.

As soon as The Seer is killed, the Vault Hunter will be given three chests, one of which will show the Mysterious Amulet. Once picked up, the mission ends. 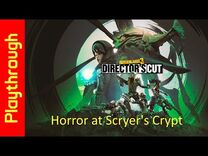