The Beard Makes the Man

My Kingdom for a Wand is an optional mission in Tiny Tina's Assault on Dragon Keep. It involves helping Claptrap consolidate his power further, this time by powering up a magic wand with the demise of several enemies in the Mines of Avarice.

Claptrap's wand needs to gain magical power from three special enemies. The first is a Magical Golem. This brute is found nearby at Stonecrag Ridge, and when the wand is inserted, the non-hostile humanoid golem vanishes to be replaced by its enemy form, an Aerial Golem named Maxibillion. Maxibillion is a weak and slow target that is easily destroyed with explosive damage. It uses an energy beam to attack with, and quickly loses its lock to wander around aimlessly if ignored. The nearby cliff edge can pose a problem if the golem is destroyed while flying over it, as the wand can disappear over the side, forcing a restart of the game to recover it.

The second magical enemy is the Magical Spider which can be found near the entrance to the Mines of Avarice. This spider has a powerful shield and can take numerous hits to kill. Shock damage is required for the kill.

The final magical enemy is the Magical Orc in Camp Dwarf Torture. When the Magical Orc becomes hostile after having the wand inserted, he attacks with a hit-and-run style, turning invisible and reappearing long enough to attack then vanishing again when he takes damage. A critical hit to the head is required to kill him. With this final charge complete, the wand is then returned to Claptrap for the reward. 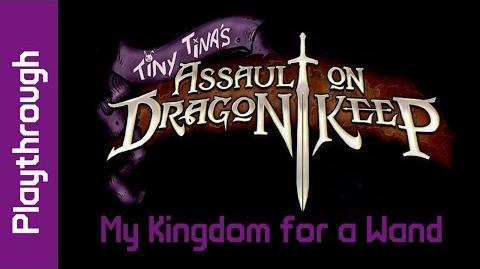 My Kingdom for a Wand
Retrieved from "https://borderlands.fandom.com/wiki/My_Kingdom_for_a_Wand?oldid=433437"
Community content is available under CC-BY-SA unless otherwise noted.