My First Gun is the first story mission in Borderlands 2 given by Claptrap. The mission is performed in Windshear Waste.

"After Handsome Jack left you for dead in Windshear Waste, you escaped the cold and met a CL4P-TP steward bot -- the last of his kind on Pandora. Shortly after you entered Claptrap's igloo, an enormous bullymong broke in and removed Claptrap's eye. Claptrap needs your help to get it back. First things first, though: you need a gun. Claptrap has asked you to grab one from his cabinet."

After inviting the Vault Hunters into Claptrap's Place, Claptrap warns them that the local bullymongs are dangerous, especially one he calls Knuckle Dragger. Immediately following this warning, Knuckle Dragger swings in through the open roof, rips out Claptrap's eye, and leaves. Claptrap then asks his new "minion" (meaning you) to find the gun he keeps in a small cabinet.

"You just moved five feet and opened a locker. Later, when you're killing skyscraper-sized monsters with a gun that shoots lightning, you'll look back on this moment and be like, "heh."" 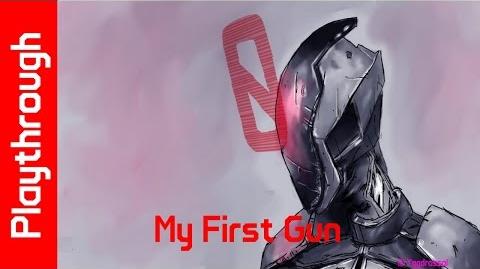 My First Gun
Retrieved from "https://borderlands.fandom.com/wiki/My_First_Gun?oldid=486970"
Community content is available under CC-BY-SA unless otherwise noted.