My Dead Brother is an optional mission in Tiny Tina's Assault on Dragon Keep. It becomes available after Dwarven Allies is completed.

In this mission the Vault Hunters are tasked with finding Edgar, Simon's dead brother. As the mission begins Simon will curse the Vault Hunters, allowing them to speak with and raise the dead. After this, several areas must be searched and each will contain several waves of skeletons.

The first area is at the Chamber of Woe where a knight's helmet is resting on the pommel of a sword. Withdrawing the sword triggers the skeleton waves, and these range from basic skeletons to mid-range units. The second location is at the Bone Barracks where the head on the sword is a bare skull and skeletons have slightly tougher units than before. The third location at Seer's Sanctum has a Badass Midget helmet on the sword, and this time the waves are considerably tougher with the skeletons ranging up to Badass Skeletons

After the third round of skeleton mobs have been destroyed, Simon remembers that he has been sitting on Edgar's final resting place all along, and wants him resurrected, just to be killed again. As soon as Edgar is resurrected however, the pair face off against each other and request that the other be killed. Simon is a powerful necromancer, while Edgar is a flame sorcerer. They will each participate in the battle, with the one who was struck first being hostile and the other becoming an ally. Siding with Edgar will reward the player with an assault rifle while siding with Simon yields a shotgun.

Turn In: Simon or Edgar 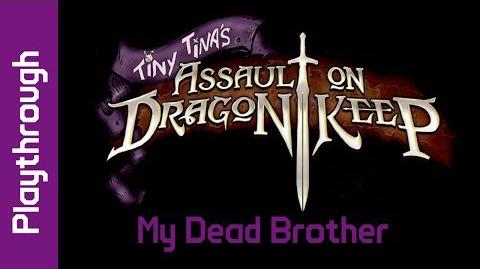