Murderlin's Temple is an underground arena presided over by Murderlin. A series of smaller chambers equipped with vending machines gives way to a vast cavernous space lit with a fiery glow. It is only accessible after the optional mission Find Murderlin's Temple has been accepted.

The Forgotten Temple is the arena proper, where the Magic Slaughter takes place. The wide open arena floor conceals a multitude of traps, including spike traps that can stun, spike pits that are instantly lethal to anyone who falls into them, and jet vents that can spew lightning arcs, gouts of flame, or corrosive gas. The exit from the temple are a series of magical stepping stones and an elevator back to the antechamber.

The Nursery is a supplementary arena in a massive cavernous space. Only accessible after the mission The Magic of Childhood has been accepted, the Nursery is formed around a central tower with a single causeway linking it to the surrounding area. The tower, initially at floor level and raised into position during the mission, is home to Murderlin's son, a freakish skeletal entity embedded inside a transparent green cube. Various openings around the periphery of the area provide start points for orcs in the area. A discoverable Vault symbol is on the wall beside the exit to the antechamber. 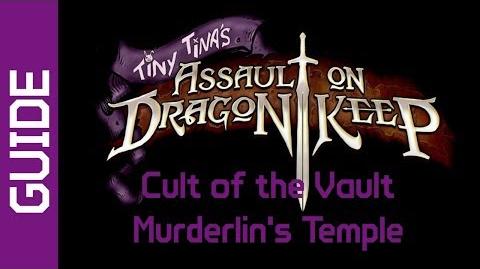 BL2 Murderlin's Temple Cult of the Vault Guide
Retrieved from "https://borderlands.fandom.com/wiki/Murderlin%27s_Temple?oldid=458470"
Community content is available under CC-BY-SA unless otherwise noted.