Mister Torgue High-Five Flexington, or Mr. Torgue shortly is the eponymous NPC of Mr. Torgue's Campaign of Carnage, the second DLC for Borderlands 2, and the 43-year-old[1] founder of the weapon manufacturer Torgue.

Mr. Torgue, originally from the planet Hephaestus, was raised by his grandmother after his parents were killed in an explosion in an Eridium mine, sparking his resolution to master the power of explosions. With facial hair and pectoral muscles at a very young age, Torgue was shy around girls in school and was made fun of for being different. Torgue's first explosive weapon (simply a Jakobs rifle with dynamite taped to the barrel) nearly killed him, and after several dozen tests, he finally succeeded in creating his first functioning weapon. He would later sell his designs and company to the Torgue board of executives for $12 and a high-five. He maintained a position at Torgue purely for "PR reasons" and his job is solely to be the face of the Torgue company.

Torgue later paid to watch the vault hunter competition at Overlook. He initially found it dissatisfying, but upon seeing the carnage unleashed unintentionally by Claptrap, he was delighted and was also inspired to hold his own tournament.

Having discovered a new Vault on Pandora buried in the Badass Crater of Badassitude that will only open "once the champion of Pandora feeds it the blood of the ultimate coward", Mr. Torgue set up his Campaign of Carnage as a tournament to find this champion and open the Vault.[2] It is also revealed by Grandma Flexington that Mr. Torgue enjoys "Bunkers & Badasses", and treasures his time with the vault-hunters deeply. He views them as his only true friends.

Although he features heavily in the Campaign of Carnage DLC, Torgue himself does not appear "in the flesh" except in the introductory movie. For the rest of the DLC, he communicates via ECHO from his "space-truck" in deep orbit around Pandora.

Mr. Torgue is featured in the DLC Tiny Tina's Assault on Dragon Keep in person, where it is revealed that "Mister Torgue" is his first name, and "Flexington" is his last. Grandma Flexington also mentions that "High-Five" is his middle name, following the Flexington tradition of using the grandfather's name as his middle name. He also admits to being an avid lover of Sci Fi, fantasy, unicorns, and *BLEEP* (in that order), and even breaks down in sobs when he is not allowed to play Bunkers & Badasses at first. Like Tina, he has a habit of making pointless quests for the Vault Hunters.

Mr. Torgue in the intro movie 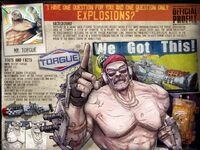 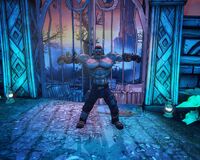 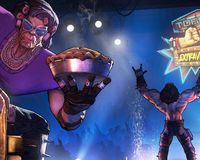 Grandma Flexington, seen alongside Mr. in a promotional image