Moserah Hayussinian Yan-Lun al-Amir Andreyevna, or Moze for short, is the playable Gunner class in Borderlands 3.

Moze was originally a soldier in the Vladof army's Ursa Corps, a mechanized infantry division that utilized bipedal, 15-ton "Iron Bear" mechs. She became a battle-hardened veteran of many ludicrously dangerous battles across the six galaxies and rose to the rank of Gunner First Class. According to the terms of her enlistment contract, she was obligated to fulfill a quota of missions for Vladof before quitting if she wanted to take her mech, Iron Bear, with her. Moze's superior, Kaziak, manipulated her into staying on longer by constantly extending the quota and playing on her guilt with claims that her absence would jeopardize the lives of new recruits who depended on her experience, much to her chagrin and anger. Moze finally decided to quit after one final mission to Darzaran Bay. The rest of her squad perished, leading to Vladof assuming her death as well. With the pain of losing her squad still fresh, she trusts only her mech, whose insides are dotted with photos and memorabilia from her past. After striking out on her own, the rising costs of maintaining Iron Bear eventually pushed Moze to travel to Pandora and seek treasure as a Vault Hunter with the Crimson Raiders.

Moze's Action Skill summons Iron Bear, her mech. It comes with its own health pool consisting of armor. Iron Bear is capable of sprinting and jumping, and can perform a double jump that allows it to hover and gain momentum - continuous use of double jumping allows for movement speed that is faster than normal sprinting. Pressing the melee button will cause Iron Bear to do a powerful stomp that damages enemies around the mech. While in Iron Bear, Moze cannot crouch, slide, grab ledges, slam, use emotes or revive teammates.

Iron Bear possesses a fuel bar that slowly drains while the mech is active and using its main weapon depletes fuel. Other actions (including its melee stomp) will not consume fuel. Weapon fire rate also affects fuel consumption. If either the fuel bar or the health bar is depleted, the action skill will end.

The base cooldown time of Iron Bear is 110 seconds. Holding the crouch button will eject Moze from Iron Bear, refunding an amount of cooldown proportional to how much fuel was left in the action skill. 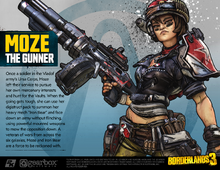 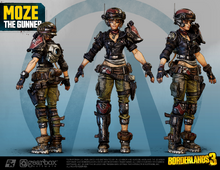 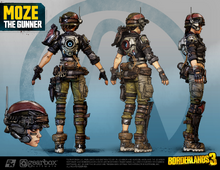 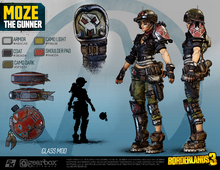 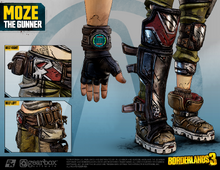 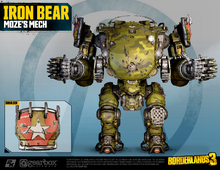 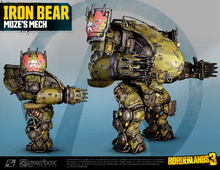 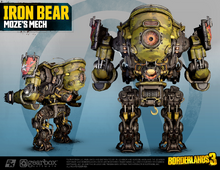 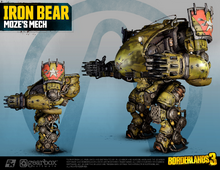 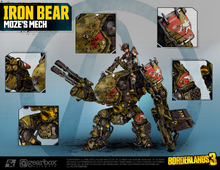 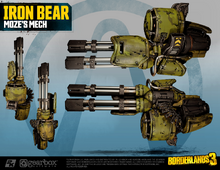 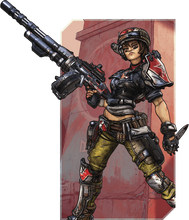