Mount Craw is a location in Tiny Tina's Wonderlands.

Think this is just another scenic snow-kissed mountain? Sit your 'butte' down, take a 'peak' inside, and the truth will blow your 'mined.' Rock stuff!

Yes, the many caves and cliffs of Mount Craw are home to a bustling gobtropolis where rowdy, nasty little Goblins and towering, tyrannical Trolls toil in the name of their subterranean deity. Not all are satisfied with their labors, however. A booger of revolution is slowly taking form in the nostrils of the workforce. It's time to pick a side! And that booger. 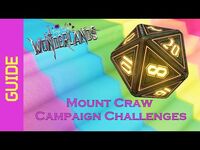