Mordecai is Borderlands' "Hunter" class. He relies on damage dealt with precise marksmanship and the use of falconry to defeat enemies and acquire loot. He returns in Borderlands 2 and Borderlands 3 as a supporting character.

Mordecai is originally from Artemis, and at the age of 17, Mordecai won an interplanetary sharpshooting competition with a revolver. The other competitors, all of whom were using sniper rifles, accused him of cheating and eventually got him banned from the competition for "unsportsmanlike conduct," although many witnesses noted that he did not display any unsportsmanlike behavior until after the accusations began. He now travels from planet to planet with his trusty companion Bloodwing, searching for "everything this freaking universe owes me," which Mordecai has defined as a better gun and unlimited cash. It is also revealed in one of his voice lines in Borderlands 3, that he has an older sibling, although not much is known about them.

(Information taken from the Borderlands manual)

Mordecai, along with Roland, Brick, and Lilith, was a founding member of the Crimson Raiders. Between the events of Borderlands and Borderlands 2, Mordecai was involved with Moxxi, whom he won as a prize from the Underdome. Their relationship went sour, and Moxxi left him for Handsome Jack. He also becomes an alchoholic, and drinks even before fighting. When Hyperion attacked New Haven, Mordecai fought Wilhelm along with Lilith and Roland, but they were easily defeated.

He learns of a Hyperion train convoy moving through the Tundra Express, supposedly carrying the Vault Key. Roland tells the Vault Hunters to meet him there, and he assists them by providing sniper fire. After Sanctuary's relocation, he heads to the Wildlife Exploitation Preserve to obtain a Claptrap software upgrade to bypass the deterrence field leading to the Bunker. Mordecai was overrun by Hyperion troops, and escaped after Bloodwing distracted them, but was taken to one of the facility's pens. The Vault Hunters manage to find her, but mutated after being subject to slag experimentation. They manage to weaken Bloodwing and retrieve the Claptrap upgrades, but Jack detonates her collar, killing her and sending Mordecai into a rage. He returns to Sanctuary after the events there.

Mordecai and Brick assume command of the Crimson Raiders after the loss of Roland and Lilith. When the Vault Hunters obtain the information on the Vault of the Warrior's location, he and Brick assist them in the first gauntlet of Hero's Path with a captured Hyperion drop barge, until it is targeted by a Moon Blitz. Against Mordecai's insistence, Brick jumps back onto the barge, which is then struck by the Blitz, sending them both crashing into the lava. Both of them manage to survive and make it to the Vault after Jack and the Warrior's defeat, and witness the activation of the map showing the locations of many other Vaults scattered throughout the universe. The sketches in the credits show Mordecai holding a Bloodwing hatchling. In Sir Hammerlock vs. the Son of Crawmerax, it is revealed that he named the hatchling "Talon", Mordecai also had quit drinking to raise him.

In Episode 3 of Tales from the Borderlands, Mordecai and Brick are hired by the gang lord Vallory to apprehend Athena, whom they learned was once allied with Handsome Jack. The two of them dueled with Athena and Fiona, and was almost defeated, had Vallory not interfered. After knocking Athena out with a rocket launcher, Vallory allowed the two Vault Hunters to take Athena back to Sanctuary.

In Borderlands: The Pre-Sequel, Mordecai is seen in the introduction scene with Brick limping away, after Lilith noted how it took the two to capture Athena. He is seen again in the final scene along with Brick, objecting to Lilith's order to execute Athena. Despite the objections, Lilith still orders the Crimson Raider soldiers to carry out the execution anyways; only to have the bullets stopped by The Watcher, who warns them that war is imminent and they need to start recruiting vault hunters.

In Borderlands 3, during the mission Hammerlocked Brick, Mordecai, Tiny Tina, and the Vault Hunter are hired by Wainwright Jakobs to rescue Sir Hammerlock. Mordecai's call sign during this mission is Birdman.

Mordecai has a Bloodwing as a pet, a predatory avian that can be unleashed upon enemies to damage or kill them.

Bloodwing can be commanded to attack enemies and can be upgraded for increased damage and speed at higher levels. Bloodwing will attack any target bracketed in the crosshairs when he launches. If Bloodwing is blind-fired, he will seek out the nearest target in the general direction his master was facing in. Bloodwing's attack range is limited however, and more suitable to close combat conditions than for supporting long range sniping.

Bloodwing can be called back before the full duration of his flight expires. If he was called back before he attacked an enemy, he can be reused immediately. Otherwise his cooldown time will commence when the bird returns after a target has been struck.

Despite this being a possible drawback to Bird of Prey, combining it with Aerial Impact can daze multiple targets.

Mordecai's play style is that of a sharpshooter. He is well suited for ranged combat, being able to have improved accuracy and dealing the most damage with well placed critical hits. Based on how his skill points are distributed, he is also able to do high damage with other guns, though most of his skills lead to a preference of sniper rifles and pistols. His melee weapon is a sword, which can also be a tool of great harm. All of these advantages come at the expense of his own durability under fire. Mordecai's active ability calls his bloodwing, a red-eyed alien bird that can be a very helpful companion in the search for the Vault.

His three skill trees are Sniper, which increases his skills with sniper rifles as well as group experience bonuses and accuracy; Rogue, which mainly focuses on increasing the potency of his Bloodwing as well as gaining loot; and Gunslinger, which improves his usage of pistols, as well as his melee weapon. Playing Mordecai involves making extra use of shields and evasive maneuvers, more than any of the other classes. Fighting in close quarters and boss battles can be difficult, while many fights in open areas will be much easier.

Mordecai helps the Vault Hunters in the missions A Train to Catch, Wildlife Preservation, and The Talon of God in the areas Tundra Express, Wildlife Exploitation Preserve, and Hero's Pass respectively. In each mission, Mordecai positions himself at a vantage point with a very clear view of the area where he can pick off enemies with great accuracy and precision with his sniper rifle.

Mordecai's sniper rifle is charged with Slag and causes a Slag explosion when it impacts either a surface or an enemy. In A Train to Catch, his vantage point is in the middle of the map which gives him a clear view of the whole area. In Wildlife Preservation, he is positioned in an area known as Casa de Mordecai, he first snipes from the cave when vault hunters' at the entrance, and moved to the top during the fight in Observation Wing. In The Talon of God, he snipes from a Hyperion barge stolen by Brick, giving him a mobile vantage point. His sniper rifle appears to become charged with explosives after Bloodwing dies. 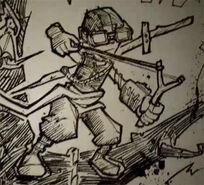 Mordecai as a child 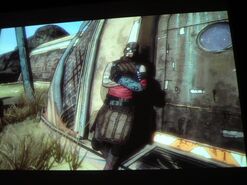 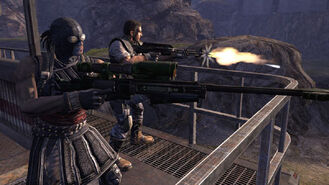 Pre-release Mordecai along side pre-release Roland 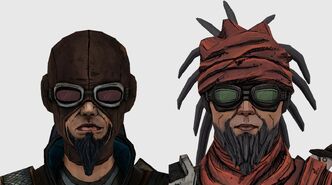 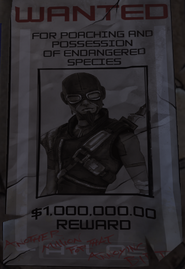 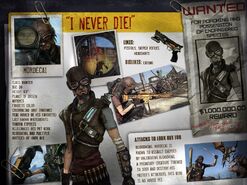