Missing Persons is an optional mission in Borderlands given by New Haven Bounty Board. It becomes available after Hair Of The Dog is complete.

"Is anyone out there willing to help me? I'm trying to find my cousin, Shawn Stokely, and his son Jed. They both live here in New Haven, but they haven't been home or responded to my calls for weeks. Jed was a troubled young man and I think he may have run away again. Shawn must've gone after him, and now I'm fearing the worst. Anyone, please, search around New Haven and find out what happened to my cousin." 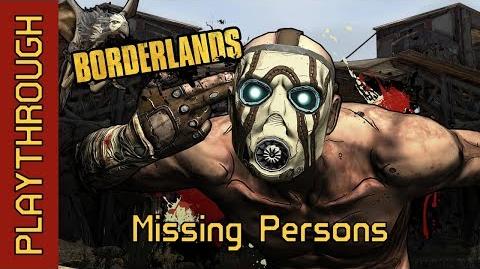 Search for evidence of Shawn Stokely's fate around New Haven.

The map marker indicates Shawn's body. It is located in the elevated hut near the entrance to New Haven from Dahl Headlands.

"This corpse matches the description of Shawn Stokely. The word 'Reaver' was carved into his forehead with a knife. The man died clutching a note in his hand. The note reads 'Father, I've joined Krom's army. Don't try to come after me. They've given me a better life than you ever did, and a new name. They call me Reaver.'"