Minecart Mischief is an optional mission in Borderlands 2 given by Old Echo. It becomes available after Rising Action is complete.

"You found an ECHO explaining that all minerals must be pulverized by the rock crusher at the end of the mining track. If you can get the mineral chunk to the rock crusher, you'll be able to get at whatever goodies it holds."

Once located, the minecart can be pushed along the rail track simply by a character positioned behind it and walking into it. It will move at a sedate pace as long as someone continues to push it along, and rolls to a stop quickly when released.

Initial encounters occur when the cart is pushed through an area with several wandering crystalisks before progress is halted by an airlock door. The switch to this is to the left of the door from the side that the cart approaches. This leads to more pushing and later encounters with varkids. The door opening exercise needs to be completed two more times on the way to the crusher.

Once in the crusher room the mine cart is pushed off a low ledge onto a conveyor and a switch is thrown to activate the conveyor and a crusher. More varkids attack during the wait time, but eventually the machine spits out five pieces of raw Eridium that are then turned in to complete the mission.

"That chunk of rock never knew what hit it." 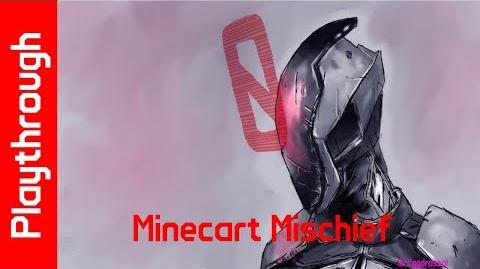