Mine, All Mine is an optional mission in Borderlands 2 given by Lilith. It becomes available after A Train to Catch is complete.

The mission takes place at Mount Molehill Mine, where an ore extraction plant is being used to mine Eridium. There are various bandits in the area, including tunnel diggers that will disappear into the ground and resurface without warning. Ten miners need to be killed in order to complete the first objective, although there are more than just ten at the base of the mine.

Once ten miners have been dispatched, the next objective to kill Prospector Zeke arises. He can be found on a higher level accessed via a pair of conveyor belts in the middle of Mount Molehill Mine. The conveyor belts pass three rock crushers that can be dodged by waiting for each to rise or timing a sprint. The damage the crushers deal is not particularly heavy.

Prospector Zeke is a tough nomad, but the optional objective to kill him with Slag can make the fight easier. His shots are not especially powerful, but he also throws grenades, which are a more substantial threat. An escape by dropping back to the base of the mine area is a viable tactic as he does not follow. When killed, he drops an ECHO detailing his past association with Hyperion.

"You discovered the bandit miners are selling their Eridium to Hyperion, presumably under the mistaken assumption that Hyperion won't eventually massacre the lot of them and take their money back. If anything, you just helped the miners skip the middle man." 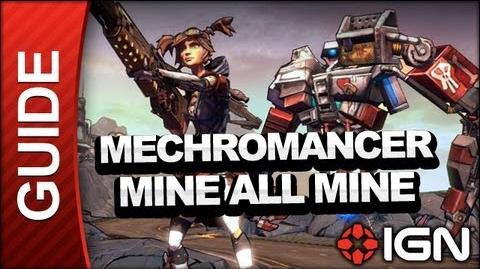 Mine All Mine - Mechromancer Walkthrough 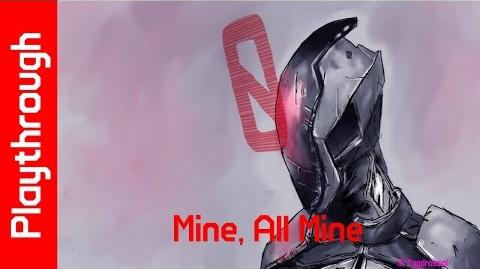 Mine, All Mine
Retrieved from "https://borderlands.fandom.com/wiki/Mine,_All_Mine?oldid=458278"
Community content is available under CC-BY-SA unless otherwise noted.