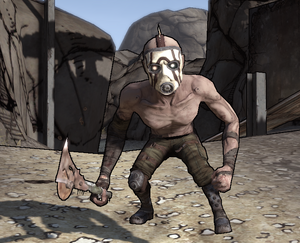 At some point in Pandora's recent past, a discovery was made at the Headstone Mine and hastily covered up. While it has never been fully revealed what was found there, it is known that a Vault key fragment came into the possession of Sledge, a grossly muscled behemoth of a man who later amassed a small army of bandits at Headstone Mine. The discovery at the mine had a surprising effect on many of the convict workers there. Most went crazy and many were physically mutated as well, growing into huge, muscular parodies of humanity, or stunted to dwarf proportions. The diminutive crazies came to be collectively known as "midgets".

Midgets are typically found among the ranks of the bandits that plague Pandora. They employ a wide variety of strategies and tactics from melee attacks to ballistic weapon use and even suicide bombing. Midgets also squeal and giggle in high pitched voices that can be quite unnerving to hear in the heat of a battle.

Loot midgets are a type of midget appearing in The Secret Armory of General Knoxx. They hide inside various containers and lootable objects.