Middle Of Nowhere No More: Scoot On Back

Middle Of Nowhere No More: Small Favor? is the third of several optional missions in Borderlands to find and repair a Bounty Board in Middle of Nowhere. This mission given by Hudson Johns.

"While I get these fuses assembled and working for the bounty board, I need a small favor. Some spiderants are causing a ruckus near by. Exterminate the bugs and when you're done I should have the fuse ready for the bounty board. You scratch my back... ya, know what I mean?" 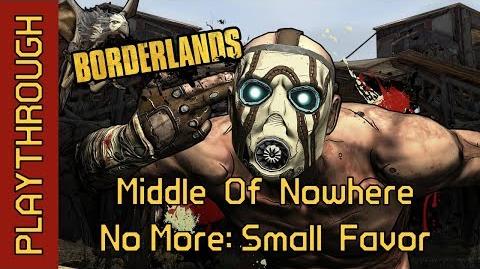 Kill off the spiderants for Hudson Johns.

The mission can be completed expediently by taking an Outrunner around the corner just north of Middle of Nowhere to kill five spiderants. They are relatively easy to kill by simply running them over with the vehicle, though fighting on foot is a good option if a powerful Spiderant appears.

"Nice work. Will be a while before those buggers bother me again. Fuses are ready and the board is up and working again."

(These missions are given by a repaired Bounty Board.)