Matter Of Taste is an optional mission in the campaign DLC, Mr. Torgue's Campaign of Carnage.

The first objective is to find and eliminate the Buff Gamer, but to do so one must fight through a group of Mama's boys bikers. These are encountered in successive groups on the approach to the back of the Game Critic's Enclave where the Buff Gamer can be found. The area is open and suitable for long-range sniping, but short-range weapons may also be needed for the Rioters and Badass Enforcers that come charging into melee range. All of the enemies are flesh targets vulnerable to incendiary damage, and roughly half are also shielded.

With the Buff Gamer's defeat comes a plea from another Game Critic that has Mr. Torgue scuttling the mission, but any Vault Hunter moving back to the entrance will trip a follow-up dialogue from the critic, and a subsequent ambush. This is a mid-range fight with plenty of cover to run for, although Vault Hunters caught off guard may be caught in a violent crossfire if out in the open. The opposition is largely identical to the previous fight, although the Game Critic may be equipped a powerful weapon and shield combination.

Turn In: Crater Bounty Board 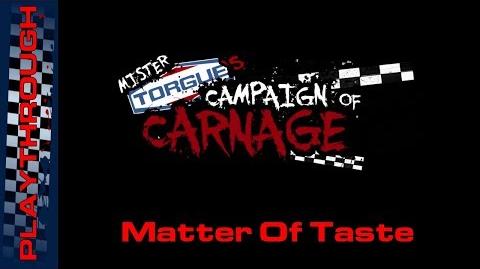 Matter Of Taste
Retrieved from "https://borderlands.fandom.com/wiki/Matter_Of_Taste?oldid=414352"
Community content is available under CC-BY-SA unless otherwise noted.