Marooned is the third story mission in Borderlands: The Pre-Sequel.

This mission is automatically accepted when Lost Legion Invasion is turned in. Springs tells the Vault Hunters that, in order to reach Concordia they need a vehicle. However, Deadlift stole Springs' digistruct key so the Vault Hunters need to kill Deadlift and retrieve the key.

En route to Regolith Range, some kraggons must be dispatched. Shortly after entering Regolith Range, Deadlift orders his scavs to attack. Advancing further reveals a jump pad leading into Deadlift's base. Deadlift deactivates the jump pad before the Vault Hunters can use it, so Springs directs them to the geothermal station nearby.

At the geothermal station, a breaker must be thrown, then one Vault Hunter needs to stand between the live wires for a second (receiving electric damage) in order to reactivate the jump pad. After jumping into Deadlift's base, all Vault Hunters need to assemble for the fight against Deadlift.

Deadlift engages the Vault Hunters in a large L-shaped room, formed roughly like a canyon. Doors on either side of the room close during the fight. The room is dotted with jump pads leading to the different levels; some lead vertically up, some up and into a horizontal direction. There are also several generators on different levels.

Deadlift has relatively low health but is equipped with a very powerful shield, making shock elemental attacks very effective against him. His critical hit point is his head. Aside from his basic attacks, he uses two special attacks: one is two slow-moving electric projectiles which home in on the Vault Hunters. The projectiles inflict a large amount of electric damage, but they can be shot out of the air. Deadlift also sporadically activates one of the generators, which electrifies the floor this generator is on.

Melee-specialized characters, especially Gladiators, having trouble defeating Deadlift may want to move in close and keep melee-attacking Deadlift while circling him to always stay at his back.

After defeating Deadlift, the door at the far end of the room opens. The digistruct key can be found just beyond in a toilet.

Instead of having them return the way they came, Janey orders the Vault Hunters to move further through an open area populated by kraggons. After jumping over a wide lava-filled gap, the Vault Hunters arrive at the Dahl Waystation, an area filled with a large number of scavs.

There is a Moon Zoomy station nearby, where the digistruct key must be inserted. The station at first denies access, until it is hit by a melee attack. After this, the Vault Hunters can activate the station and digistruct a Moon Buggy. The way continues out the gate and past another kraggon-populated area to a gap with jump ramps. After clearing the gap, the Vault Hunters reach a second travel point leading towards Serenity's Waste.

The Vault Hunters may continue driving through Serenity's Waste right into Springs' place, where the mission can be turned in.

Borrow the Orbatron for an unspecified amount of time. (Like, forever.) 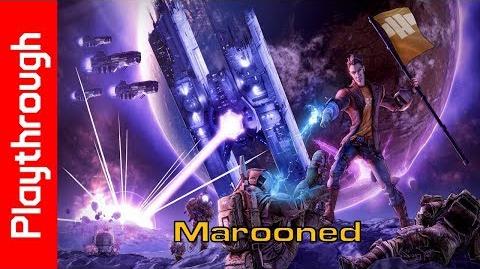 Marooned
Retrieved from "https://borderlands.fandom.com/wiki/Marooned?oldid=439730"
Community content is available under CC-BY-SA unless otherwise noted.