Magic Slaughter: Badass Round is the last and repeatable round in a series of six optional survival missions in Tiny Tina's Assault on Dragon Keep. It given by Murderlin. The mission series and Murderlin's Temple in which it is conducted become available after initial mission is complete.

Initial waves of the Badass Round consist of skeleton and knight enemies of various kinds. Explosive damage employed against them provides a global damage source that is effective on all of them, while some are more susceptible to incendiary attacks. Dwarves then also enter the arena, fielding all of their unit types and soon the waves become dominated by all kinds of badass enemies.

The Crystal of Perpetual TERROR lowers twice during the Badass Round and will unleash its powerful magic blast if not destroyed in time.

Orcs dominate the closing stages of the battle, and with warlords among them, they can level up to become far more dangerous opponents, both from sheer damage output and from knockback attacks that present an additional hazard in the vicinity of open spike pits. Their final assault comes in the form of a suicide rush from a wave of orcs carrying various exploding barrels.

"You successfully showed Murderlin's minions what a true badass is. Well done!"

Turn In: Murderlin The Wizard 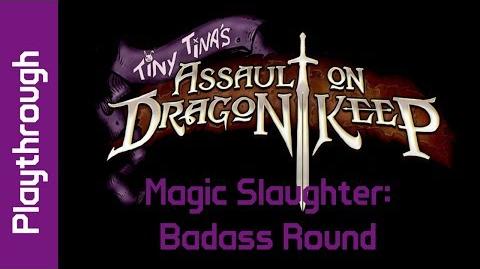 Magic Slaughter Badass Round
Retrieved from "https://borderlands.fandom.com/wiki/Magic_Slaughter:_Badass_Round?oldid=417044"
Community content is available under CC-BY-SA unless otherwise noted.