Mad Moxxi and the Wedding Day Massacre is a Headhunter Pack for Borderlands 2. The DLC includes a small story and a boss fight with a unique head and skin to unlock as well as a few secret activities that provide additional loot.

The DLC can be accessed by Fast Traveling to Rotgut Distillery where the first mission will automatically start. The level is set when the area is first visited, but in Normal Mode is at least 15 and at most 35. 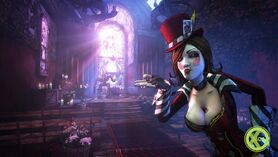 The story revisits the Hodunk-Zaford feud. A goliath from each family will be married in order to bring peace to the two families. However, things are not off to a good start and the couple are at each other's throats. The Vault Hunters are tasked by Moxxi to gather ingredients for a love potion to ensure that nothing goes wrong.

This DLC includes one story mission and a smaller "fetch" mission.

Like the other Headhunter DLC's, there are several secret activities available in mad Moxxi and the Wedding Day Massacre:

Throughout Rotgut Distillery, several pieces of bait can be found and picked up. Each piece of bait is colored to match a specific rarity and can be used at one of the fishing poles near the pond. Each piece of bait summons a different unique Thresher. Summoning and defeating a thresher awards loot and the ability to place a "trophy" at a nearby trophy board. If all five trophies are placed within a single visit to Rotgut Distillery access is granted to a special loot chest.

An enemy called the Loot Leprechaun can spawn from any of several small caves at the edge of the area. The Loot Leprechaun moves very quickly, leaving a rainbow trail in his wake. If shot, he does not take any damage, even if slagged. but he can be hit with a melee and after each hit he will drop loot, usually money and items of blue and green rarity. He can be hit three or four times before finally disappearing. If not hit in time, he will escape into a cave.

The DLC introduces Rotgut Distillery as the sole location. The area is medium-sized and includes a mix of indoor and outdoor environments. Within the area is a Zaford distillery, small village, motel, and chapel. Throughout the area there are three Ammo Dump and two Zed's Meds vending machines. A Quick Change location is also present.

And few original ones appear together with the DLC:

This pack includes a new head and skin for each class. The head is obtained as a mission reward from A Match Made on Pandora and the skin is obtained as a drop from the "Lovely Couple" boss fight featuring Bridget Hodunk and Colin Zaford. The Skin is not guaranteed to drop the first time the boss fight is completed and may need to be farmed. 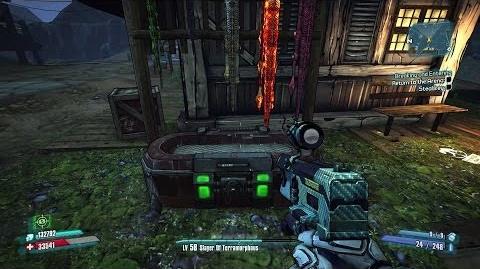