This article is about the downloadable content pack. For other uses, see Moxxi.

"Are you god's gift to gun fights? Think you're the best? Wanna prove it? Then help us celebrate the grand opening of Marcus Bank (a subsidiary of Marcus Corp) by killing hundreds and hundreds of people in Mad Moxxi's Underdome Riot, the only competitive arena around where your next of kin can be assured that you're coming back famous... or not at all. (All proceeds are kept by us)"[5]

Mad Moxxi is a thrill-seeking woman in search of a new husband. Having gone through three husbands already, her search has led her to becoming the Ring Master/Hostess and Commentator of the Underdome. She considers the Underdome and the excitement of the competition like matrimony and plans to stay only as long as the thrill lasts. Gameplay will include three new Riot Mode arenas where players will fight AI-controlled enemies (PvE) in single player or multiplayer.[3] The expansion starts with a mission entitled "Prove Yourself" in which the player must complete all three arenas.

The gameplay consists of rounds and waves. Each round consists of five waves ending with a Boss wave. Every round brings an increased difficulty level. As the round number increases, the number of gameplay-altering Rules increases, adding variables such as different gravity levels and modified enemy regeneration, accuracy, damage, etc. If a character is incapacitated and fails to achieve a second wind in a multiplayer game, they will respawn in the Penalty Box on top of Moxxi's tower (from which they can still play an active role by sniping enemies) for the remainder of the wave. No experience is gained from kills inside the Underdome and consequently weapon proficiencies are not affected. 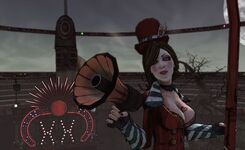 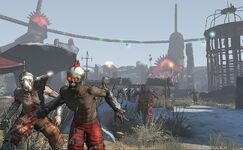 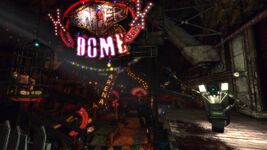 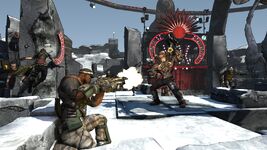 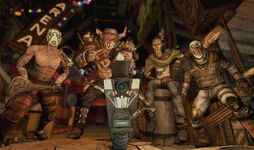 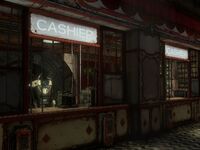 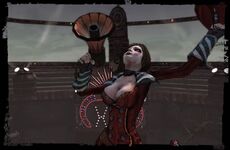 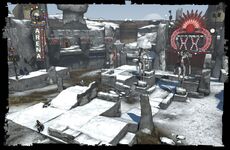 You will be rewarded after the completion of each round, after you kill the boss, a few weapons of any quality a few levels below your own will spawn under the player spawn point. These weapons are usually of good quality, and you may have a fair chance of finding an Eridian weapon. Be sure to grab them before the timer runs out, and the next round begins.

Having more than one player in the arena fighting increases the quality, and amount of weapons after each round.

The trophy list from a PS3 update revealed the following achievements associated with the new DLC.[6][7]

This DLC has been known to cause glitches with some users. The cause has not yet been determined, but on occasion the DLC will delete equipped Shields, Class Mods and Grenade Mods. Instances of this have been linked to the "Naked" rule in the DLC. On many occasions this has happened when in multiplayer games with connection problems however it has also occurred in Single Player.

It has been suggested that players back up their save files prior to playing the DLC. On the PC, save files are located in the folder SaveData in Documents > My Games > Borderlands. On Xbox and PS3, an additional save should be made to an external device or external folder. If items have been lost, they can be replaced by overwriting the corrupted save file(s) with the backup. When replacing a corrupt file on a console the original file should be deleted first as many consoles do not allow overwriting.

Please keep in mind that backup save files must be kept up to date otherwise when they are utilized the user will lose all progress made since the last backup. To replace the save file of one character instead of all characters, the character's save file must be identified and only that file switched. Save files are numbered in order of chronology. For example, the first character created is named Save0001.sav. Save files are numbered Save0001-9 and Save000A-Z.

You should check your inventory after every session. If you find your shield/COM/grenades missing, try equipping a different one from your pack. Doing this may cause your missing items to reappear, albeit unequipped, in your inventory. This may not work if you have already saved and quit while bugged.

This happened to my friend's shield one of his class mod. Once we finished the final round and went to the main area, we checked Dr. Zed's store and his exact shield and class mod were in the store for sale. This could be entirely coincidental, but if you do lose your shield: check the store, it could be there.

An edit by:AcidOfLacuna[Xbox 360 and PS3]

There is in fact a way to skip a few of the rounds.

What you will need:

The thunder storm - Because regular bullets will only do 1 damage to the enemy, whereas the thunderstorm does a great deal of elemental damage fast enough to take out the boss.

To wait before killing the henchmen - The programming that was done appears to be that if there are no enemies the boss wave on the field after the first one appears, end that round. By killing the boss fast enough, you make this true. The henchmen still spawn, making it so that when you kill them after the next round starts, this is true again.

This basically saves you 4 rounds each time, as you will still have to fight wave 1 of the previous round. It will still save you the additional time, as wave 1 of the next round will spawn while you are still fighting that previous wave.

Some boss waves this will not work with. Their spawn time is delayed or they have extreme recharge on their shields upon spawning. So basically you'll be able to get, within the 20 rounds, 3-5 of them skipped, which can save upwards of 1-2 hours depending.