MMORPGFPS is an optional mission in Tiny Tina's Assault on Dragon Keep.

Three gamers stand lined up at a crypt, ready to kill a boss monster. When the Vault Hunter arrives, the trio defend their position, claiming that the kill is going to be theirs alone. A Skeleton Swordsman emerges from the crypt and they waste no time in dispatching it. They intend to hang around for the next spawn and claim that kill as well, so a new plan is put in place to make them rage quit.

Getting them to rage quit requires three separate objectives, one for each. xxDatVaultHuntrxx will quit the game when he is "teabagged" twice. This requires him to be killed, and having the Vault Hunter crouch directly over xxDatVaultHuntrxx's corpse. 420_E-Sports_Masta needs to be killed by melee twice, any gun or grenade damage used to reduce his life will be inconsequential. [720NoScope]Headshotz needs to be killed by a sniper rifle shot to the head. Again, preceding damage may be used to lower her health, but as long as the killing blow is delivered by a head shot with a sniper rifle, the objective can be completed.

Each time any of them die, they will respawn after a lengthy delay during which they will be visible in a greenish ghost form, which cannot be harmed. In the interim, any of them can be killed off outright to thin out their ranks for one or two to be singled out alone - the temporarily vanquished foe will respawn soon enough.

Once the trio has rage quit, another monster exits the crypt. This time it is a tougher Badass Skeleton, and disposing of it completes the final objective. 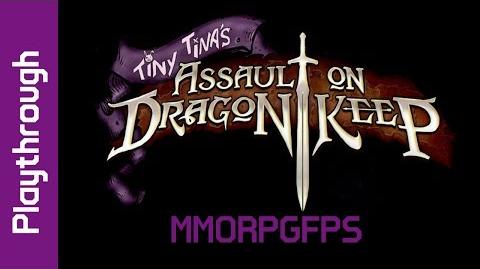 MMORPGFPS
Retrieved from "https://borderlands.fandom.com/wiki/MMORPGFPS?oldid=469839"
Community content is available under CC-BY-SA unless otherwise noted.