Louise Moss is a character who appears in Tales from the Borderlands as the tour guide.

Just as she finished a tour, she took the time to get a coffee with some liquor in it. She was approached by Sasha for a casual talk, but shortly after a robot spilled some drinks on Louise's outfit. Sasha then berated the robot, which impressed Louise, and suggested Sasha to apply for management job. Louise and Sasha then went to get Louise some dry clothes from her apartment. It was all a ploy to steal her tour access badge, which Fiona took. 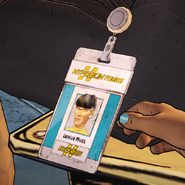 Louise's badge
Add a photo to this gallery
Retrieved from "https://borderlands.fandom.com/wiki/Louise_Moss?oldid=428332"
Community content is available under CC-BY-SA unless otherwise noted.