Lost Souls is an optional mission in Tiny Tina's Assault on Dragon Keep given by a Crestfallen Player.

Igniting the first bonfire with a fire weapon causes four Skeleton Seers to spawn. These skeletons have strong shock attacks and have the ability to vanish during combat. Ablative spangenhelms and pauldrons offer additional protection to their heads and shoulders. As each one dies it drops a green, smoky mission item - the souls of fallen adventurers - to be collected and returned to the Crestfallen Player.

The third bonfire releases a varied set of skeletons consisting of an Armored Skeleton, a Brittle Skeleton, an Enchanted Skeleton Archer, and a Fiery Skeleton. Each one drops a soul item to be collected.

Upon returning the souls to the Crestfallen Player, the skeleton stands up and becomes a fully flesh-covered human. At this point the game is invaded by his nemesis, and the reason for his skeletal predicament, -=n00bkiller=-. -=n00bkiller=- is a hostile knight who fights with a sword and shield. He uses a sword attack and a kick to deal damage, and otherwise withdraws into a defensive crouch behind his shield when he is struck. He is a tough opponent, and takes many hits to kill, but his attention splits between the Crestfallen Player and any other attackers, ensuring that the lengthy fight is not a particularly dangerous one. 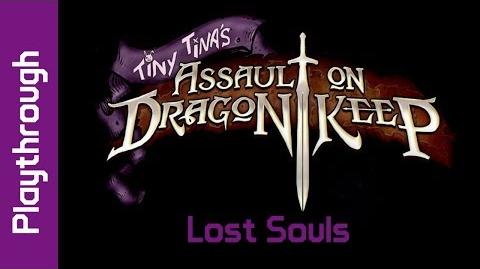