Lost Legion Invasion is the second story mission in Borderlands: The Pre-Sequel. It starts with Jack attempting to guide the escape from Helios station, and continues to retrieving an Oz Kit with the help of Janey Springs.

This mission is automatically accepted when Welcome to Helios is turned in. Jack attempts to activate station security, but two turrets appear on the left and right side of the console he works on. These must be destroyed.

The mission then continues in the same vein as the previous one. Vault Hunters must follow Jack and clear the areas of hostile Lost Legion forces before continuing. While the first such area contains standard enemies only, the second one shows an intro cutscene upon entering, and then the first boss enemy Flame Knuckle arrives and must be defeated. He enters the fight in a Dahl powersuit and attacks with incendiary damage. Other Lost Legion fight alongside. Once Flame Knuckle's health has been depleted, he emerges from the powersuit as a shielded infantry unit and must again be defeated.

After this battle, Jack asks the Vault Hunters to cross a narrow bridge into a huge hollow cylinder, so that he can transport them to a higher floor. Once this is done, a FIX Loader obstructing the elevator has to be dislodged with a melee attack.

When the container is opened, the Vault Hunters are exposed to the vacuum of space. New characters (except for Claptrap) who are not yet equipped with an Oz Kit continually lose health until they reach an oxygen-rich environment. Springs offers instructions on how to survive in the airless environment, passing an Oxygen generator, and leads the way to safety.

After some dialogue, Janey orders the Vault Hunters to a building north-east of her place. Upon arrival there, an Oxygen generator can be activated. Four locks must be meleed in order to open the door, two of them by jumping. Inside the room, some kraggons attack. Once they have been dispatched and the Oz Kit lying on some boxes been picked up, Springs rejoins the Vault Hunters in the building and the mission can be turned in.

"Well that was a fun ride! Let's never do it again ever. Maybe." 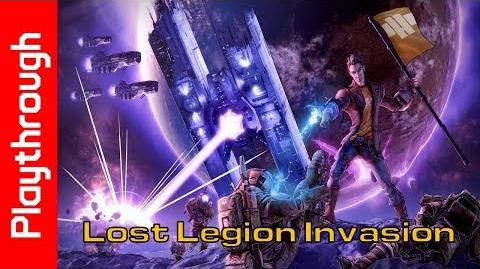