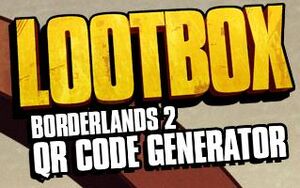 Loot the World was an out-of-game reward system using a free downloaded app for iOS and Android introduced on Dec 12, 2013 but has since been shut down on Oct 18, 2015. This app linked mobile devices to Borderlands 2 SHiFT accounts and allows certain QR codes to be scanned for in game loot via Stamps. Up to twenty items could be stored on a mobile device until they had to be deleted or sent to a SH!FT account.

Random product QR codes could generate items and these items would be the same for everyone. Once an item was "found" information could then be passed to anyone for the same item although there was a limit on how many times an individual QR code could be accessed for loot before becoming "exhausted".

QR codes could also be sent from Gearbox or by unlimited generators such as LootBox2 or BL2Loot.com. Certain promotional items such as The Bee shield were introduced to bring about interest in Loot the World.

Retrieved from "https://borderlands.fandom.com/wiki/Loot_the_World?oldid=411169"
Community content is available under CC-BY-SA unless otherwise noted.