Loot Ninja is an optional mission in Tiny Tina's Assault on Dragon Keep given by Sir Gallow. It becomes available after Dwarven Allies is complete.

"A knight named Sir Gallow suspects one of his friends of a most heinous crime: loot ninja-ing. In other words, someone has stolen all of the gear that dropped from an enemy he and his buddies killed. He's asked you to track down his friends and kill them all in an attempt to discover which of them stole his loot."

There are three knights highlighted on the map. Note that Sir Stew can be reached only by dropping down to a rocky ledge beneath the castle's balconies.

At the location of each knight is an object to be searched, but each search conducted draws the ire of the associated knight. Each knight is vulnerable to corrosive damage.

When the last of the knights are eliminated, Sir Gallow still agrees to offer the reward that he promised, but when he goes to retrieve the reward from his wooden chest he is promptly eaten by it after it proves to be a disguised mimic. The mimic succumbs quickly to incendiary attacks or shotgun blasts, and then the mission can be turned in.

"Murder: completely fine. Stealing loot from somebody you murdered: unacceptable." 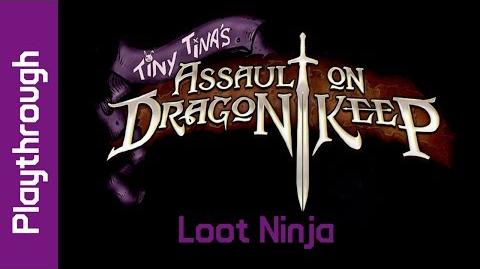