Gun, Gunner! –  Always incendiary. Rounds explode once on contact, then continue traveling if they have not struck an inert surface (wall, ground, etc.). Once they strike an inert surface there is a small delay, followed by a small second explosion. Rounds qualify as rockets for the purposes of shield absorption. Consumes 2 ammo per shot.

Logan's Gun functions as an E-Tech Spiker with an added penetration ability and thus normally cannot score critical hits. Unlike a standard Spiker, the rounds from Logan's Gun explode instantly on contact, making it less difficult to use since there is no delay before finding out if a round has actually hit or not.

Shots fired that hit enemies will do normal damage to them; however, upon hitting a surface, the projectile detonates three times in rapid succession, dealing the weapon's damage on each explosion. Because of this property, Logan's Gun is, counterintuitively, most effective when aiming for the surfaces around an enemy. It can also be used to lay down damaging walls of fire on the ground that can hit quick enemies. 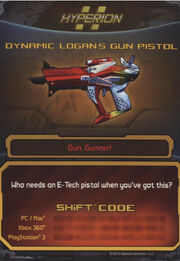