Lock and Load is an optional mission in Borderlands: The Pre-Sequel.

"This idea is even better than the last one."

This mission is available from the southeast bounty board in the Lunar Launching Station. Jack wants to try a moonshot with loaders now. A rack of four loaders must be loaded onto the conveyor leading to the moonshot cannon by activating the console located on the upper landing near the beginning of the conveyor.

As the loaders are placed on the conveyor, Lost Legion Marines will appear and attempt to destroy the loaders before they reach the cannon. If all four loaders are destroyed prior to their destination, the mission will fail. When the loaders complete the journey, they can be fired to the moon from a console on the lower level nearby. Successfully escorting at least one loader to the cannon will complete the mission, which can then be turned in at the bounty board.

"You have delivered to the bandits a fresh hell not yet fully realized." 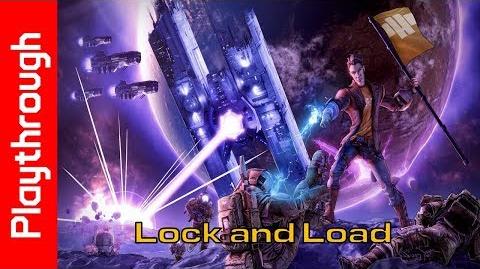 Lock and Load
Retrieved from "https://borderlands.fandom.com/wiki/Lock_and_Load?oldid=474377"
Community content is available under CC-BY-SA unless otherwise noted.