Loader #1340 is an EXP Loader left behind in the aftermath of Hyperion's attempt to capture Roland. It appears exclusively during the mission Out of Body Experience.

Malfunctioning in the wake of the assault on the Bloodshot Stronghold, Loader #1340 failed to detonate, and was captured by members of the Bloodshot Gang. When first encountered, it is being stomped on by two Marauders, whereupon it finally self destructs, leaving behind its AI core.

Wishing to abandon its life as an agent of destruction, the AI core requests that it be placed in a new body, leading to a series of failures as it attempts to kill its would-be rescuer, first as a constructor, then a WAR Loader, and finally a malevolent radio. In resignation, it admits defeat and requests that it be fashioned into a shotgun or a shield, where it is finally reborn as either the Shotgun 1340 or 1340 Shield respectively. 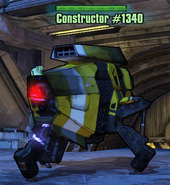 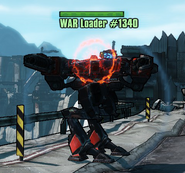 Main article: Out of Body Experience