This article is about a character in Borderlands. For other uses, see Firehawk (disambiguation).

Lilith is Borderlands' "Siren" class. She is originally from the planet Dionysus and is one of six Sirens, a group of women with unbelievable powers.

Lilith plays a noticeable role as NPC in Borderlands: The Pre-Sequel. After the opening of the Vault and the defeat of General Knoxx, Lilith and Roland traveled to Pandora's moon Elpis on a vacation trip. There was where they met Jack for the first time, who asked them for help against Colonel Zarpedon through the Vault Hunters. They didn't want to have anything to do with that at first, but they ended up helping when they realized the true danger behind the attacks. So, they cooperated with Jack and the Vault Hunters to recover the Helios station and its main weapon, a giant laser, until they saw how Jack killed three scientists throwing them into space on the suspicion that one of them might be a spy. Lilith didn't want to continue helping him, but Roland kept acting normally and then made a plan in order to defeat Zarpedon while also preventing Jack from using the laser. They keep helping but, with Mad Moxxi's help, at the end they destroyed the laser and almost the entire Helios station. Later, Jack found the Vault he was looking for on Elpis and obtained an Eridian relic that granted him some visions of The Warrior's existence; but Lilith, who had been following him, appeared and destroyed the relic, creating a blast of energy that branded Jack's face with a Vault emblem.

Thanks to the revelations Jack got from the relic at Elpis, and other events from the PreSequel, he knew exactly what to do in order to take complete control over Pandora, leading to the events of Borderlands 2.

Sometime later, the Crimson Raiders captured Athena, a former Lance Assassin-turned-Vault Hunter who was among the people that helped Handsome Jack rise to power during the events on Elpis. Originally, she was a deserter from the Crimson Lance and was rescued and helped by Lilith and the others (during the Secret Armory of General Knoxx DLC). Knowing that, and threatening her with a firing squad, Lilith demanded that Athena explain why she did what she did. Athena recounts the events of Borderlands: The Pre-Sequel, leading up to Jack's takeover and argues that the Jack she knew then was nothing like the one that nearly destroyed Pandora, but Lilith blames Athena for everything that happened and orders her execution anyway, even when Mordecai and Brick, who can understand Athena after the story, tell her not to do so. The arrival of a mysterious alien, The Watcher, saves Athena and warns Lilith that "War is coming", and that she'll need every Vault Hunter she can get.

During the Epilogue of Claptastic Voyage DLC, after Claptrap recounts Jack's conquest to eliminate the line of Claptrap units, Lilith apologizes to Athena for ordering her execution.

Lilith and Roland returned to Pandora as Hyperion began its rise. Lilith's powers grew substantially from absorbing Eridium, the element released after the defeat of the Destroyer. She was one of the founding members of the Crimson Raiders to fight against Hyperion, along with Brick, Mordecai, and her then-boyfriend Roland.

During Hyperion's raid on New Haven she, along with Roland, Mordecai, and Brick, were defeated. With the city overrun and she presumed dead by Hyperion, they were forced to abandon New Haven for Sanctuary. Roland ended his relationship with Lilith in order to focus on Hyperion and the Crimson Raiders, while she drew Bloodshot bandits away from Sanctuary under the alias Firehawk.

After Roland was captured by the Bloodshots, she sent a message under her Firehawk alias telling the Vault Hunters to come to Frostburn Canyon. When they reached her base of operations, they discovered that Roland wasn't there and that Lilith was the Firehawk. After fighting off waves of psychos, Lilith returned to Sanctuary to lead the Raiders in Roland's absence. She remained there after Roland's rescue.

When Sanctuary became unshielded after Angel's treason, as Hyperion attacked Lilith doped herself with a large amount of Eridium to strengthen her powers. She was able to make the whole city enter Phasewalk with her. Sanctuary became the current flying city, safe from Hyperion for the moment. However, she had revealed that she was alive and working with the Crimson Raiders.

Later, Lilith was told to stay and defend Sanctuary during the assault on Control Core Angel, but defied both Angel's insistence and Roland's orders to stay away. She assisted the Vault Hunters in fighting off hordes of Hyperion robots, and Phasewalked Roland to reach the shield generators, allowing the Vault Hunters to destroy Angel's Eridium injectors. With Jack's Siren catalyst dead, Roland went to retrieve the Vault Key, but was shot from behind by Jack himself. Lilith attempted to attack him, but was restrained by Jack through some kind of artifact that gave him control over her powers, to replace his dead daughter to charge the Vault key. She teleported the Vault Hunters back to Sanctuary instead of killing them at Jack's orders.

She was taken to the Vault of the Warrior, where she became the catalyst to charge the key against her will, while undergoing torture from Jack. The Vault Hunters found her there, along with Jack, who fought them, but while fighting the key became fully charged, so, even defeated, Jack summoned and controlled the Warrior. Anyway, the warrior was defeated as well. With his own vision of a Pandora ruled by order crushed, Jack angrily chastised the Vault Hunters, before being executed by them or Lilith. After Jack's death, she intended to destroy the Vault key to prevent anyone else from using it for misdeeds but, instead, she inadvertently activated a map showing the location of the many other Vaults scattered throughout the galaxy. Following the events at the Vault, she returned to Sanctuary along with Mordecai, Brick and the Vault Hunters, inheriting leadership of the Crimson Raiders and continuing their fight against Hyperion. She later attended Roland's burial along with Mordecai and Brick.

In the opening mission of Borderlands 3, Lilith is looking for new Crimson Raiders recruits who are willing to investigate the Children of the Vault cult. She gives missions to the Vault Hunters to find more information about the new Vaults popping up around the galaxy because she cannot do it herself since Tyreen has leeched her ability to her Siren powers. As head of the Crimson Raiders, she can command the tiny army that they have to investigate certain areas. When Tyreen is ultimately defeated, Lilith gains her Siren powers back and risks herself to save both Pandora and Elpis. It is currently unknown if Lilith is alive or dead.

Lilith's action skill is called Phasewalk, which lets her turn invisible to enemies (but not to her teammates, to whom she appears as translucent blue), move much faster, and cause a damaging shockwave (Phase Blast) upon entering and exiting. When fighting in Arena Battles Phasewalk will make Lilith invisible to opposing players, but all Sirens in Phasewalk can see each other, regardless of teams (as they are all in the same dimension). Spark does not work in Arena either however it does function in duels. Gearbox Software co-founder Randy Pitchford describes it as, "kind of like when Frodo puts on the ring, except that when she takes it off she can kill everything around her with a shock wave nova effect". This effect can be altered by using unique artifacts that can add elemental damage to the Phase Blast.

Lilith typically operates as a close range striker, using numerous elemental damage enhancements to inflict damage and a range of self-buffing skills to quickly enter and exit the fray, as well as to survive once in the heat of battle. Her active ability, Phasewalk, allows her to either sneak in or out of hostile groups with the cover of invisibility and increased speed, and she's capable of dealing high damage with melee attacks combined with Phasewalk, or with ranged attacks. She can especially excel with Elemental weapons, and is capable of dazing the opponents she hits. While not exactly durable, Lilith can use her Phasewalk defensively to aid her survival.

She has a class mod that enhances SMGs, and with The Secret Armory of General Knoxx, one that enhances sniper rifles as well; otherwise she can use any weapon type, with some advantages from the skill tree for high-damage critical-hit weapons like snipers, and slow-projectile weapons like the Eridian Cannon. Lilith's melee attack is an energy blast. Her skill trees are Assassin, which gives her more damage in melee/ranged combat and on critical hits; Controller, which gives her the ability to daze targets she attacks and boosts her shields; and Elemental, which adds bonuses for weapons that employ explosive, static, incendiary and corrosive damage. Spread throughout the three trees are some defensive abilities to increase her resilience and elusiveness. 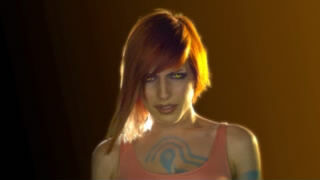 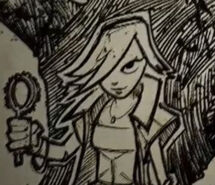 Lilith as a child 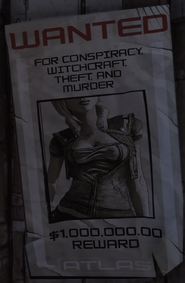 Who doesn't want that cash? 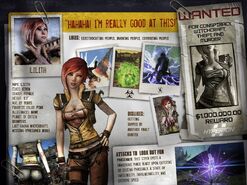 Retrieved from "https://borderlands.fandom.com/wiki/Lilith?oldid=484119"
Community content is available under CC-BY-SA unless otherwise noted.