Life of the Party is an optional side mission activated by Mordecai in Devil's Razor after completing the Boom Boom Boomtown optional mission.

Mordecai has been training a young girl on Pandora to become a new Vault Hunter, and he wants the Vault Hunters to visit her on her birthday as special guests. He first asks that they pick some flowers for Grace's party. Waypoints should be followed to pick them up, then meet with Mordecai at The Lonely Pillar as he stands over Grace's grave with her father Hirschim.

After placing the flowers on the grave, Hirschim explains that Grace was killed by varkids, but he's determined to celebrate the party in her memory regardless and leads the Vault Hunters up to his home. First up is some birthday cake. Hirschim brags that Grace's best cake-eating record is 11 slices. There are twelve slices scattered around the area but only two have to be eaten to progress the mission. Eating all twelve slices will make Hirschim and Mordecai surprised at the Vault Hunters selfishness.

Hirschim then leads the Vault Hunters over to the grenade range where he has ring targets set up. The Vault Hunters get to throw grenades into the rings for points. Only five points have to be earned and breaking Grace's record of 50 points makes Hirschim even more upset.

Next is the shooting range. The Vault Hunters and Mordecai will compete to shoot as many Rakk as possible. A time limit is given for the challenge and Grace's record is 30.

After talking to Hirschim, he asks for the Vault Hunters to break the piñata. 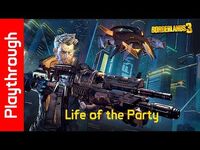