Let There Be Light is the sixth story mission in Captain Scarlett and Her Pirate's Booty.

With three compass pieces in hand, Captain Scarlett now offers the fourth and final piece. These are assembled on a nearby table with the activation text: "Place Herbert's piece", "Place Sandman's piece", "Place Hyperion piece" and "Place Scarlett's piece". Once they are assembled into a complete compass, Scarlett instructs that they be taken to Magnys Lighthouse where they will complete Captain Blade's beacon.

Magnys Lighthouse is defended by sand pirates in roughly three groups. The first is at long range and can be adequately fought with sniper rifles, their return fire with such weapons as shotguns seldom able to connect. The initial fight soon switches to more conventional mid-range skirmishing when their position is approached and they send out their minelayer. After the first group of pirates, stalkers are then encountered in a cave and are better fought with shock weapons or wide area explosives. Finally the last two pirate groups in the way are presented in a varied collection of different units that are again fought at various ranges.

Beyond the last of the pirates is a lever that brings an elevator platform down from the light house above. Activating this also summons a number of hostile pirates from the surrounding buildings, which then attack in several waves while players wait for the lift to arrive. The result can be a dangerous fight, as the character used to activate the lift is in a precarious position and anchormen can sometimes drag a target right off the cliff edge. Robust characters are sometimes better used in the thick of the fight with transfusion attacks than anywhere near the edge. The waves of attackers can be eliminated altogether, although the high number of common enemies usually doesn't offer lucrative rewards, so it's often preferable to make the ascent on the lift and leave the pirates behind.

The top level of Magnys Lighthouse is empty and quiet. An elevator ride up the lighthouse itself leads to the beacon chamber where the compass is inserted to complete the mission.

"The location of the Lost Treasure is revealed - now go get it!" 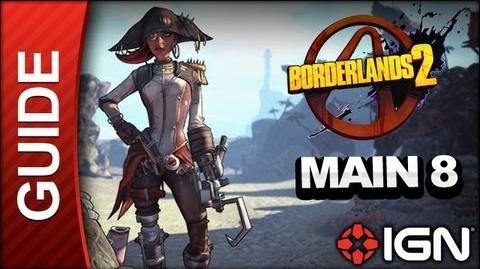 Let There Be Light - Commando Walkthrough
Retrieved from "https://borderlands.fandom.com/wiki/Let_There_Be_Light?oldid=426774"
Community content is available under CC-BY-SA unless otherwise noted.