Let's Build a Robot Army is the seventh story mission in Borderlands: The Pre-Sequel.

This mission is a multi-stage mission spanning airless tork-infested areas that soon give way to scav-controlled areas with occasional breathable environments. Most of the enemies can be ignored if the character is fast enough, though there are multiple areas where they are required to kill all the enemies in the proximity before they can proceed, them being:

Arguably the toughest stage prior to the boss fight is the turret testing, as the game will continue to generate badass enemies, which the turrets cannot tackle easily. Thankfully, no time limit exists, making the process easier. The scavs also do not concentrate too much fire on the turrets, so they will not be destroyed.

When Felicity is in her powersuit, characters are advised to keep their distance, as the scavs will attack them otherwise. Felicity cannot be destroyed (although she will lose health), so she does not need to be escorted, as she is capable of handling the enemies on the way with her devastating attacks (Ramming at enemies when far, stomping them, bludgeoning them with the arms, stomping, and firing the incendiary autocannon).

Initially, Felicity is very clumsy and appears unaware of the full range of abilities of her new Badass Constructor body. She can attack by ramming, as well as her incendiary lasers and missiles. Their accuracy improves as she loses health, in addition to firing more missiles the less health she has. Dahl Security Bots will spawn to assist her, in addition to the two integrated blast turrets and a grenade turret. She will also move around frequently across multiple spots of the arena, but at one point halfway through the battle she will always head to the center platform and digistruct a set of loaders before leaving.

After the destruction of her turrets and a further loss of health, she starts to digistruct two Surveyor bots — regular repair and Protector one, with the former healing her (at a decent rate) and the latter surrounding her with an impenetrable shield, reflecting most types of projectiles and absorbing the rest (splash damage will still go through, such as with rocket launchers). Sometimes, only the shield drone is spawned. With the loss of her Powersuit legs, she learns how to use the built-in rocket engine for an incendiary nova attack (which is utilized at random). Finally, with the help of Gladstone she discovers how to digistruct prototype GUN Loaders, although they are similarly unarmed at first. Dahl Security Bots will no longer spawn at this point.

In the last stage of the fight, and on low health, Felicity completes her transition into a prototype Badass Constructor.

Felicity Rampant can pose serious threat on the first playthrough, but the difficulty in subsequent difficulty modes is largely offset by the availability of rocket launchers.

"You got a brain and now you've got the brawn. It's go time." 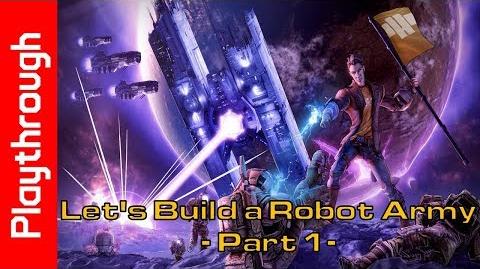 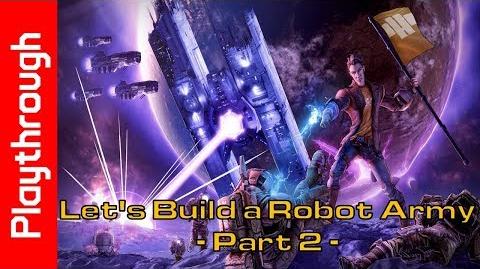