Learning to Love is the only optional mission in Mad Moxxi and the Wedding Day Massacre.

Innuendobot 5000 has apparently watched too many romantic comedy vids on the ECHOnet, and now he wants to know true love. For his first request, he asks that some cigars be taken from the Hodunk bridesmaids located near Moedown Motel. He then asks for a blonde wig, which can be taken from the head of Stella the loader near the distillery. She and her lover Ed won't be happy, so they will both have to be destroyed. The final item to collect is some grease, which is found inside the distillery on the path to the pot of gold's former location.

The items are then returned to Innuendobot just outside the distillery, so that he can make gift bundles from them. The blonde wig is then taken to Lilah Ann Hodunk, but she does not respond nicely to Innuendobot's come-on. The cigars are taken to Innuendobot's second suitor, Nathaniel Lynn Zaford, who also declines. The final gift is taken to Moxxi, who responds by requesting that Innuendobot be killed, despite his attempt to sweet-talk his way out of it. 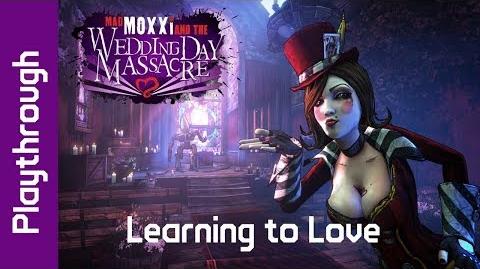 Learning to Love
Retrieved from "https://borderlands.fandom.com/wiki/Learning_to_Love?oldid=413954"
Community content is available under CC-BY-SA unless otherwise noted.