Last Requests is an optional mission in Borderlands: The Pre-Sequel.

Thorsen's corpse can be found deep in Regolith Range. Various kraggons inhabit the area, but can largely be avoided with running and jumping. If fought, their innate fire resistance makes incendiary weapons a poor choice against them. The corpse, once investigated, gives up an ECHO recorder detailing Thorsen's last requests.

His first request is to transmit word of his demise to Colonel Zarpedon. The transmitter is on the roof of a building in scav territory. The scavs are mostly basic, but can present a challenge with their numbers and attacking positions. The ranged attackers among them have cover and shoot from long range, while Lunatics try to get close and slam.

Once the message has been transmitted, the next task is to kill Squat, one of Deadlift's lieutenants. Squat can be found on a nearby roof, accessed by way of a jump pad between the two buildings. He is a little tougher than the other scavs, and fights at a distance. While he may initiate a melee attack at point blank range, he normally tries to retreat if anyone gets that close.

Finally, Thorsen's ECHO gives a request to find Nel. Nel is on a path accessed from the roof that Squat is found on. The sole purpose of locating Nel is simply to call him a dick.

Zarpedon messages her approval at the successful completion of these tasks and provides the coordinates of a hidden loot stash as a reward.

"But really, kindness is its own reward. Hah, try saying that with a straight face! Loot is so much better." 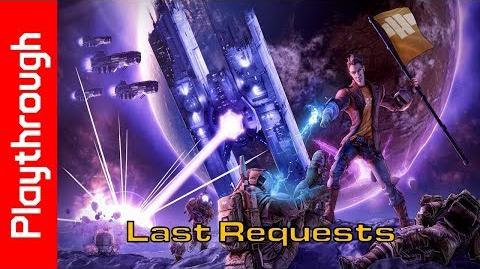