The gun of the Bulls. – Very high, variable burst-fire count. Shots fired form a pattern of a bull. Fires two bullets at the cost of 1 ammo.

The Lascaux is a surprisingly powerful weapon as it fires two bullets for every one consumed, effectively doubling its listed rate of fire. When combined with its shot count of 9 to 14 rounds in burst fire mode, this results in 18 to 28 bullets being fired in a single burst. The Lascaux's high bullet output for its rarity and availability makes it an effective weapon for close-range combat.

Although the Lascaux has no muzzle climb, its firing pattern has a relatively large spread that makes it inaccurate at longer ranges. 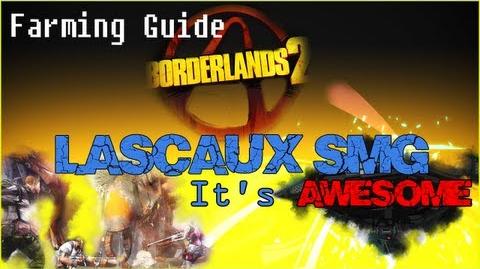 3 Lascauxes at its spawn point
Retrieved from "https://borderlands.fandom.com/wiki/Lascaux?oldid=485253"
Community content is available under CC-BY-SA unless otherwise noted.