The Lair of Infinite Agony is a location within the Borderlands 2 DLC Tiny Tina's Assault on Dragon Keep.

Bone Barracks is an area in the northwestern part of the Lair. On one end it is connected to the Temple of Misworship and on the other, via an elevator, to the Hall of The Dead. The whole area is heavily defended by skeletons and floor traps. There is a large room in the center featuring a well-lit alcove with a dice chest and two unassuming chests in it. Entering this particular area spawns several waves of skeletons.

A dungeon inhabited by skeletons. Various levers and dwarven runes open individual areas within the chamber. To get through the hallway to the Grim Stone Sepulcher, Vault Hunters must run through a series of platforms to avoid being crushed (incurring a reconstruction fee, but not resetting Gaige's Anarchy stacks). The dingy confines of the Chamber of Woe conceal a secret: a statue here will accept an offering of 20 Eridium to reveal a secret passage to The Winged Storm (after accepting the Raiders of the Last Boss mission).

A small dungeon containing spiders and acid traps. A dwarven rune on the eastern wall opens the door to the Death Quencher Well area.

A sunken and partially flooded dungeon, Death Quencher Well is home to various spiders. It is connected to Crawler Hall at the south end by way of a ladder, and the Chamber of Woe via stairs in the north.

A large room containing skeletons. The Temple of Misworship is accessed via a large stone stairway.

Hall of the Dead

This long corridor connects to a vast chamber that opens onto Wailer Drop. Fiery Skulls come flying up the corridor after an intruder walks down passed the first alcoves. Various mid-level skeletons and some spiders in habit the far end at Wailer Drop. An alternative stairway into the start of the corridor lies opposite the one used to access the corridor for the first time, but this can only be opened from the other side.

Heart of Nightmares is in the westernmost part of the Lair and is where Sorcerer's Daughter is fought. It is oval arena-like area with little to no cover. On its far end there is smaller room with exit to the Dragon Keep, one unassuming and one dice chest in it.

Seer's Sanctum is in the southernmost part of the Lair and is where the final part of My Dead Brother mission takes place. There is one dice chest there.

Temple of Misworship is in the central-northern part of the Lair and above the Grim Stone Sepulcher, and is inhabited by wizards. There is one unassuming chest and number of other lootable objects in here.

A dank and moldy dungeon containing an elevator up to Crawler Hall, a Fast Travel, and vending machines. Another elevator to an upper level of Wailer Drop is inactive initially, but can be activated once the upper level is accessed by other means. At the eastern end of the dungeon, players can interact with Simon for the My Dead Brother mission. 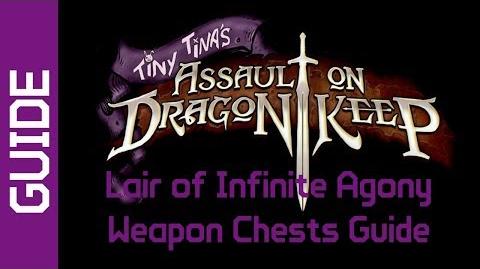 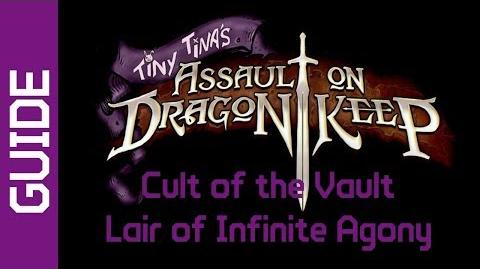