Lab 19 is an optional mission in Borderlands: The Pre-Sequel.

When the mission is accepted from the first ECHO recorder, subsequent objectives to locate another ECHO recording and Lab 19 itself arise. Lab 19 is opened by way of a computer console, but to open access a four-digit code must be entered. The combination lock can be seen up on the wall beyond the console. Shooting the arrows to either side of the numbers raises or lowers them, and an accurate single-shot weapon is optimal for hitting these small targets without wasting ammunition.

The numbers for the combination lock are located in another room marked on the HUD. These numbers are valid for a limited time, so a quick dash back to Lab 19 will be needed to input the code in time. The distance can be shortened by reading the numbers through a glass wall on the path between the two rooms, or communicated to another player waiting to enter the code in a multi-player game.

The Tiny Destroyer is extremely weak and does not require any specific tactics or weapons to be killed.

"That was... wow. Just wow. I don't believe that just happened. Thanks, Nakayama." 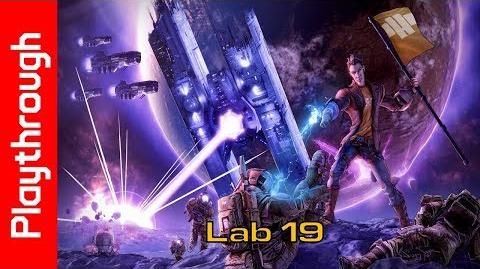 Lab 19
Retrieved from "https://borderlands.fandom.com/wiki/Lab_19?oldid=461824"
Community content is available under CC-BY-SA unless otherwise noted.