Scales with character (to a max of 50)

l33t h4X0rz is an optional and recurring arena side-mission in the Claptastic Voyage DLC from Borderlands: The Pre-Sequel.

After accepting the mission, the Vault Hunters use the arrow keys on three consoles in the room to control three aspects of the arena. The icon on the front of each machine will change as the arrow keys are pressed, and the icon itself can be activated to show a description of the currently-selected option.

Both Mutator Game Mode and Mutator Modifier determine what type of chests will be used to distribute awards after the arena has been completed, and the Party Intensity is used to determine the average quality of items found in those chests. At intensity level 9, legendary items can be found in the reward chests. While the Game Mode and Modifier are being selected, the Vault Hunters should see the appropriate chest digistruct in its container: Gray, Red, or Glitch.

Once the arena options have been chosen, Vault Hunters pay a fixed amount of money to another console in the room to actually start the fight. Once all Vault Hunters have dropped down into the arena area, a three-wave battle will begin, commentated on by Racist Hotdog and Birthday Cat.

Each wave is generally dominated by one class of enemies, like Glitches, Viruses, Software B4ND1Ts, or Insecurity/Clapdogs with many Badass variants among the crowds. Various Bugs will also spawn, useful as Second Wind fodder and typically not as dangerous as the other forces themselves (though BadassBug.exe can be problematic, and Adbugs and SpyBugs can impede the Vault Hunters' effectiveness). Sometimes instead of a wave of enemies, the arena will instead spawn a recreation of the battle against 5H4D0W-TP.

Once all three waves have been dispatched, the Vault Hunters can use a jump pad to get back up to the control area, loot the reward chests, turn the mission in, and optionally start another arena.

"The cat is pleased. This is truly the gift that keeps on giving." 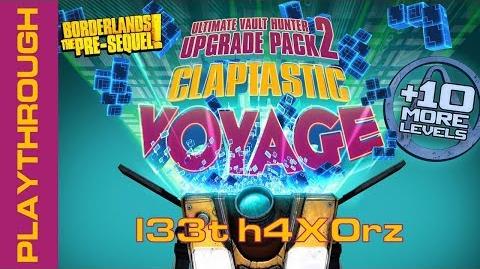