Krieg is the playable Psycho class character in Borderlands 2. He is the sixth playable character in the game and was revealed on March 24, 2013, in the Borderlands 2 Krieg the Psycho Character Reveal Trailer. He was released on May 14th, 2013 on Steam and PlayStation Network for $9.99, or 800 Microsoft Points on Xbox Live.

Whatever Krieg went through to make him the blood-drinking, meat-loving killer that he is, it is noted he wasn't always like this. Krieg's psyche has a remnant of who he used to be--a literal inner voice which forces Krieg to only kill the deserving, and help others. The voice often remarks that he remembers helping people, getting paid with loot, and other Vault-hunter-esque pursuits. It's also informed Krieg that should Krieg ever kill an innocent person, the inner voice will take over and commit suicide to kill them both as punishment.

In his graphic backstory, Krieg is shown wandering the wastelands of Pandora, wielding only his buzz axe, killing bandits and many other hostiles along the way. The inner voice seemed to have far less influence on his actions in those days, barely able to keep his blood lusting vessel from targeting hostiles over non-combatants. After narrowly avoiding getting splattered by a train, Krieg sees Maya at the train station. Krieg's inner voice somehow knew she is both a Siren and a Vault Hunter, and told Krieg to ally himself with her and let her take care of him. However, Krieg instead screamed at the top of his lungs, "I'm the conductor of the POOP train!". Maya misinterpreted this as being hostile and opened fire at Krieg, only to attract a pack of rats.

Too focused on Krieg, Maya does not notice the cannibalistic bandits approach from behind. Somehow Krieg's inner voice, with some difficulty, managed to influence his darker side to warn Maya by shouting, "Turn around, pretty lady!" while throwing his buzz axe at one of the rats. After retrieving his axe, Krieg continues by rushing towards the rats to defend Maya, butchering the rats with ease and terrifying one of them unconscious. After helping Krieg finish off the rest of them, Maya softens up to the madman, and Krieg's inner self gains hope that perhaps he can regain himself one day, though his outer self was too preoccupied screaming about ribcages and cockatiels to express it. Afterwards he is seen clinging to the side of the train the Vault Hunters were passengers on, which explains how he ended up in Windshear Waste after the train explosion. 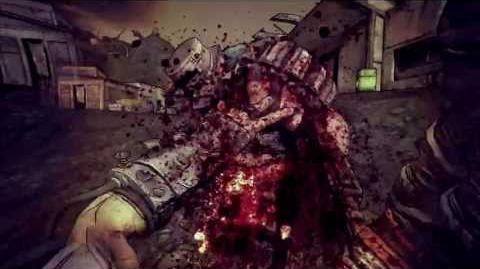 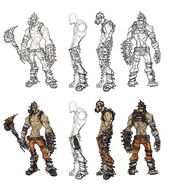 Retrieved from "https://borderlands.fandom.com/wiki/Krieg?oldid=391201"
Community content is available under CC-BY-SA unless otherwise noted.