Knockin' on Heaven's Door is a story mission in Mr. Torgue's Campaign of Carnage given by the Forge Bounty Board. The mission is performed in The Forge.

"Only one man stands between you and Piston: a teenage gladiator named Flyboy. Unfortunately, Flyboy's lair is - to use his words - "friggin' impenetrable." The best you can hope for is to active the three access points around the Torgue Forge, which will release some of Flyboy's personal buzzards. Then, you can kill the buzzards and - if all goes well - Flyboy will be angry enough to allow you into his lair, where he can kill you personally."

The first access point switch is to the right and at the very top of the scaffolding. After activating this switch, retrace your steps to before you took a right to get up onto the scaffolding and the second switch is on the wall in that area. This opens the door next to the second switch, allowing you to go to the Junkyard. Once you reach the Junkyard, a lot of loaders will spawn for you to deal with. The third switch is inside a shack. You can then head to the battle board and turn in the mission.

"By opening the access points, you can now go after Flyboy's personal buzzard armada. If you can destroy them and piss Flyboy off, you'll have a chance at entering his lair."

Turn in: Forge Battle Board 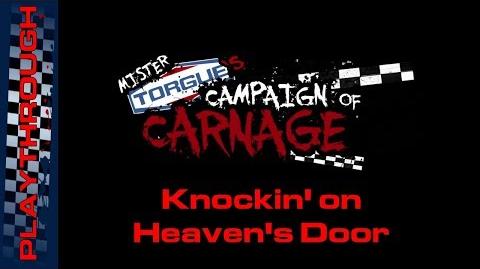 Knockin' on Heaven's Door
Retrieved from "https://borderlands.fandom.com/wiki/Knockin%27_on_Heaven%27s_Door?oldid=414358"
Community content is available under CC-BY-SA unless otherwise noted.