We're all mad here. I'm mad. You're mad. – Fires three bullets per shot at the cost of one ammo. The shot spread takes the shape of a smiley face, with two eyes and a wide grin. The spread starts out tight, lengthens, and then closes in again. Heals the user for 4% of all damage inflicted when the weapon is equipped.

The Kitten is very strong at close range, but is limited by its waning and waxing spread at long range. Though the pattern varies somewhat the bullets quickly leave the area marked by the center of the reticle, making it very difficult to hit targets that are more than a few feet away. For this reason, the Kitten is best used as a high-speed shotgun replacement rather than a traditional assault rifle.

When choosing a Kitten between various options, prioritize rate of fire and/or damage over accuracy, as the fixed pattern will make almost no difference between variants with different accuracy. The Kitten is very inaccurate in every case, even if the weapons have components that improve accuracy. 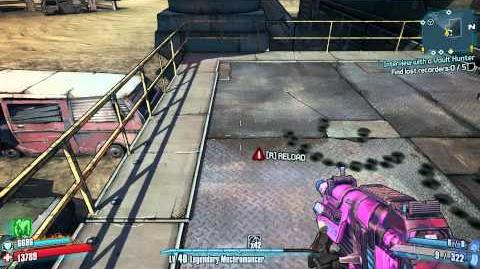