It takes two to get one in trouble. – Grenade homes in and sticks to the target's face. Deals elemental damage over time until the target dies or the grenade detonates. Upon exploding sends out life orb that heal allies. Does not release child grenades upon detonation. Child grenade count reflects the number of life orbs released. Increased damage compared to standard transfusion grenades of a similar level.

Instead of releasing child grenades upon detonation, the Kiss of Death seeks out and sticks to the target's face dealing constant elemental DoT for the length of the fuse time (always 3 seconds), including explosive damage. This makes the Kiss of Death less effective than the standard counterpart for dealing with several targets but instead deals massive damage to a single enemy. 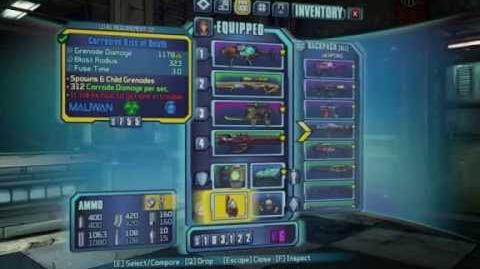 Borderlands 2 - Grenade Mods - Kiss of Death (Transfusion)
Kiss of Death gameplay demo
Add a photo to this gallery
Retrieved from "https://borderlands.fandom.com/wiki/Kiss_of_Death?oldid=365086"
Community content is available under CC-BY-SA unless otherwise noted.