Optional mission
Kill Yourself is a mission given by Handsome Jack via the Jack Bounty Statue.

Handsome Jack offers this mission to go to Lover's Leap and commit suicide by jumping off the platform there. Upon arrival, a Marauder demonstrates how it is done, shouting that he will be rich as he plunges to his doom.

On the building nearby, there is a button that calls the Hyperion Suicide Prevention Hotline, which completes the "Don't do it" option, giving more XP, but no Eridium. For easy Eridium, players can jump their characters off the platform. If the suicide option is undertaken Handsome Jack will send a transmission instructing a return to the bounty board.

If the "Don't do it" option is chosen by pressing the button, a woman's voice will say, "Thank you for calling the Hyperion Suicide Prevention Hotline, Handsome Jack regrets to inform you that you are a coward." Shortly afterwards Jack ECHOes and says, "Enjoy your nothing, idiot!"

"Handsome Jack made you a most unusual offer. You told him what you thought of it." 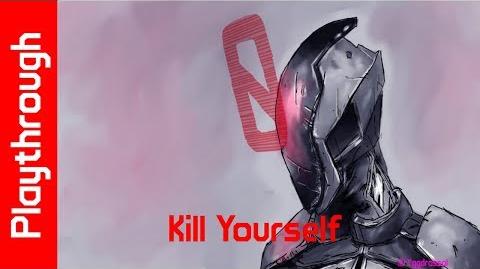 Kill Yourself
Retrieved from "https://borderlands.fandom.com/wiki/Kill_Yourself?oldid=472863"
Community content is available under CC-BY-SA unless otherwise noted.